Many people on Twitter have been bugging me to finish this review. The fact of the matter is, this was a particularly hard review to write. Objectively speaking, there are serious problems with this controller, all of which should have been corrected. But subjectively, I like this controller. I’ve been using it consistantly to play through GTA; I keep going back to it. Maybe its the old PlayStation gamer in me coming out, but I like this controller. 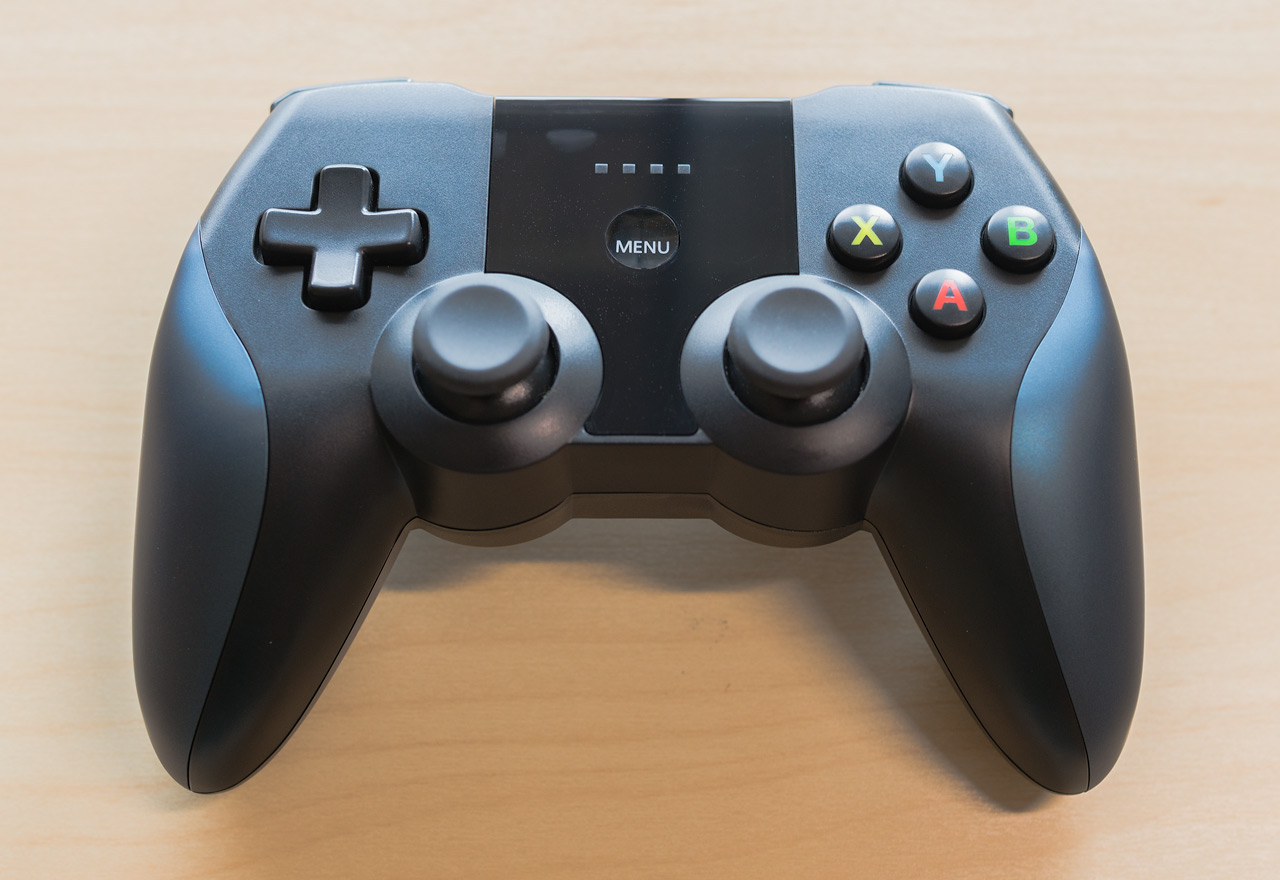 Let’s start with the best things first. Hori deserves serious praise for the design of this controller. It is an objectively beautiful controller – a premium-quality matte black plastic body, with matte bluish-graphite handles, and a glossy black mid section. It works – it looks and feels like a high quality product.

This is especially notable next to the original Horipad. I loved that controller, but lets be honest – it was hideous. The glossy plastic body and shiny faux-metal analog stick podium made it look like a cheap third-party knock-off controller. The build quality was outstanding – the highest quality of any MFi controller at the time – but the looks sold it short.

With the Horipad Ultimate, Hori finally has a controller that looks as good as it feels. I prefer the look of the SteelSeries Nimbus – it still looks more “premium” than the Hori option – but Hori made massive strides in this direction.

Among fighting game aficionados, Hori is famous for their d-pads. The previous Horipad had one of the best circular d-pads of any controller I’ve ever used. This new Horipad has a superior ‘plus’ shape. I had (justifiably) high expectations for this d-pad. It delivers – the Horipad Ultimate has the best d-pad of any MFi controller.

This d-pad is responsive, it has a perfect shape, it isn’t sized too large or too small – it’s about as good as you could hope for. For retro games, side-scrollers, and emulators, this d-pad single-handedly makes the Horipad Ultimate the best controller you can get. Within the confines of the MFi standard, it’s hard to imagine any way to improve things. It took a long time (and a lot of terrible examples), but the d-pad is finally a solved problem for MFi controllers; other companies should pay close attention to what Hori has done. 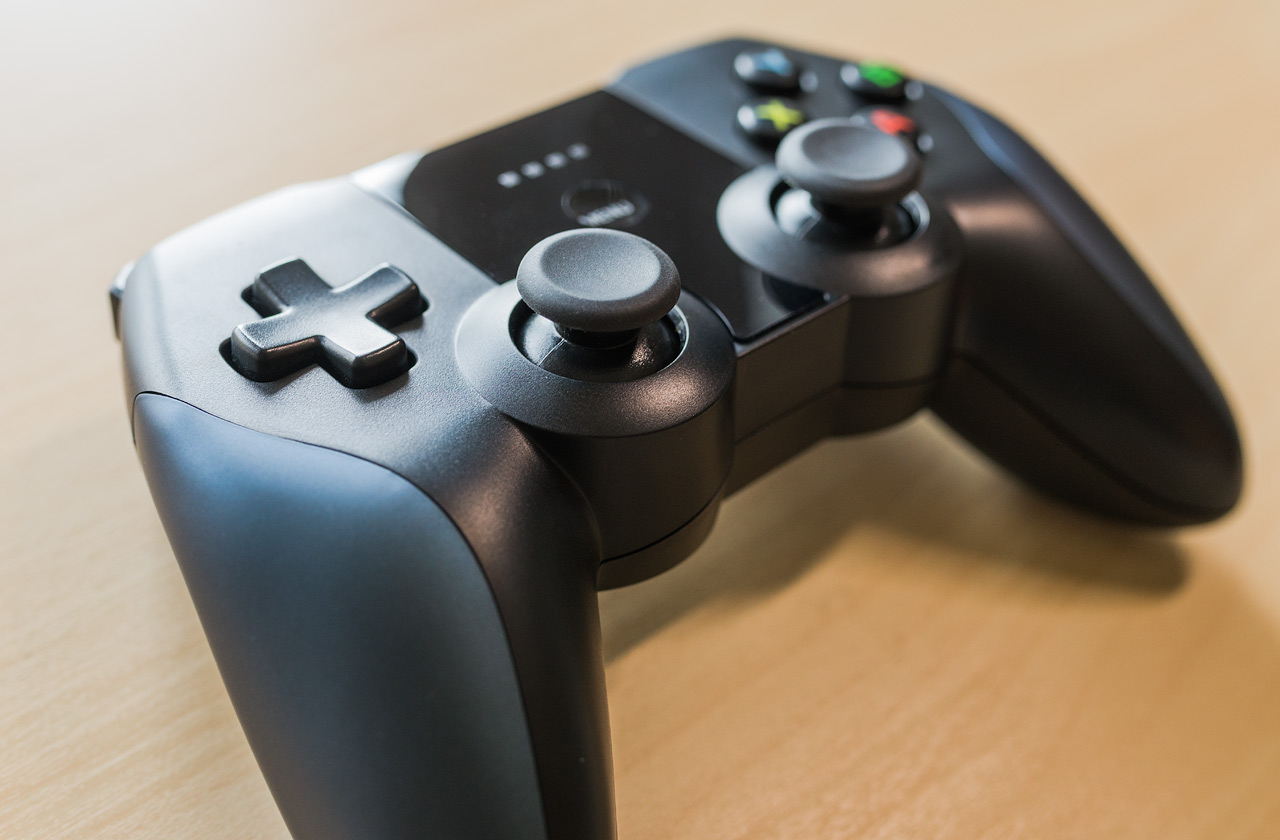 The Horipad Ultimate prides itself on being a gamer’s controller, and the ABXY buttons don’t let it down here. They are very traditional, highly responsive, PlayStation-style designs that should appeal greatly to hardcore gamers. The matte surface, wide spacing, higher profile, and less rounded surface make for buttons that are highly responsive, if a bit less comfortable than the Nimbus.

The double-shot plastic construction looks fine, but again, is less impressive than the embossed 3D buttons on the Nimbus. It is indicative of a trend with the Horipad vs the Nimbus – the Nimbus looks better, but the Horipad is more responsive for the hardest of hardcore gamers. 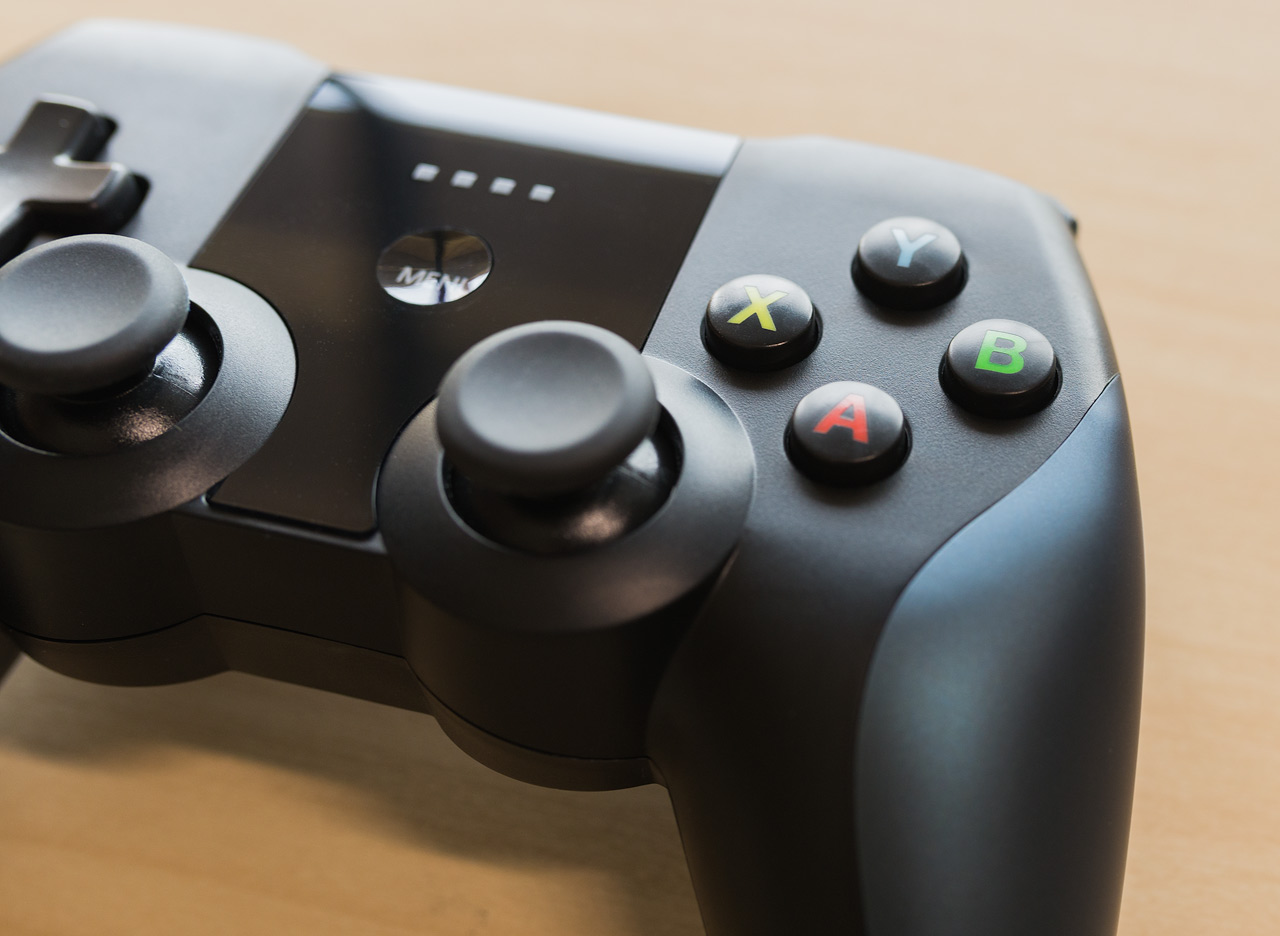 The analog sticks on the Horipad Ultimate are perfectly adequate, but disappointing compared to both the competition and to Hori’s previous products. On the plus side, the upgraded Bluetooth implementation means these sticks are extremely responsive. The problem with the feel of the analog sticks themselves: the surface has little grip to it. No Xbox-One-style ridges, no PlayStation-style texture, no Xbox-360-style indentations. Just a solid piece of rounded, lightly concave rubber. It’s not the end of the world, especially for people who primarily press their thumbs against the edges of the analog stick, but it is a downgrade.

Controller makers are supposed to learn from their mistakes, and keep iterating towards perfection. The analog sticks on the previous Horipad are objectively better than these “ultimate” sticks, and they weren’t even the best options available at the time. Now that the Gamevice and Nimbus have leapfrogged the competition, Hori was supposed to up their game. Instead, they stepped slightly backwards. Again, these sticks aren’t bad, just… disappointing.

Hori was so close to perfect with this controller. I can forgive the analog sticks, especially for a retro-focused controller. But then we come to the triggers. These triggers have a significant dead zone before your fingers encounter any resistance. For the first half of activation, it’s just loose plastic. When you finally reach the activation point, and the pressure starts abrubtly, leaving a short range until the triggers bottom out. In addition to feeling unpleasant and cheap, this design makes fine-grain motion difficult.

These triggers are especially irritating in light of the excellent R1 and L1 shoulder buttons – very PlayStation-esque designs, responsive and easy to activate. The previous Horipad had R2 and L2 shoulder buttons instead of triggers, and it would have been fine for Hori to do the same here. Great shoulder buttons beat bad triggers any day.

I have to give special mention to the Horipad Ultimate’s menu / pause button. It is one of the more clever buttons I’ve seen on an MFi controller. It feels almost identical to the home buttons on the pre-TouchID devices – concave, about the size of your thumb, with a satisfying click. It may be the least important button on the controller, but they did a great job of it.

Turning on the controller involves toggling a slider switch on the back of the controller, same as the Nimbus. This is a nice upgrade from older controllers, which used a power button to turn on, making it unclear sometimes whether a controller was on or off.

The Horipad’s internal battery is rated for 80 hours – a huge amount, far larger than other MFi controllers. In the month or so I’ve been using this controller, the battery died once. Charging it was as simple as plugging it into one of the many Lightning cables I have set up around the house – no extra USB cables required here. This is how every MFi controller should work. 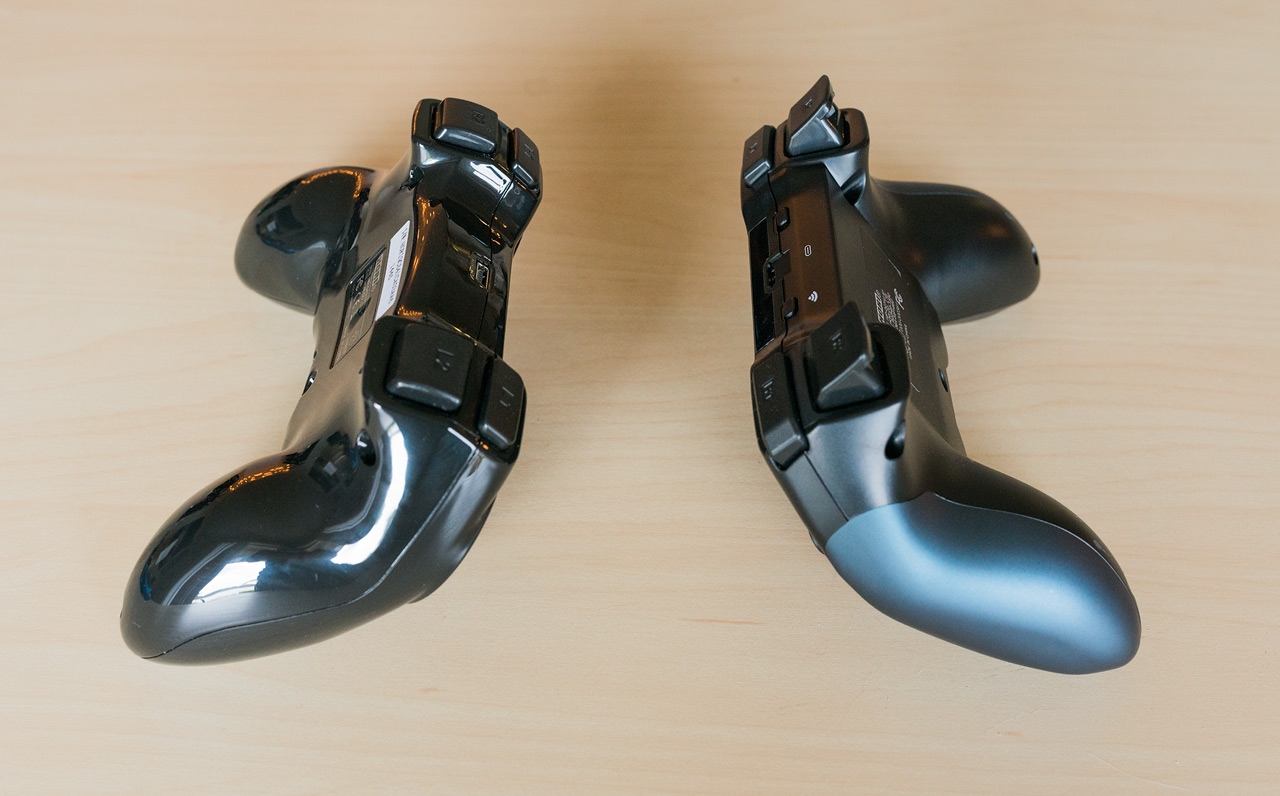 The Horipad Ultimate’s biggest weakness is its lack of an iPhone grip. That makes it a complete non-starter for iPhone owners. I will never, ever understand this. I cannot understand why controller makers don’t make grips for every iOS controller – iPhone owners make up well over 90% of the total iOS user base. Add in the 10 cents worth of plastic that makes up an iPhone grip, and the market for your controller is literally ten times larger.

Sadly, it doesn’t seem like you can even use a third-party controller grip with the Horipad Ultimate, either. The Nimbus works very well with a third-party Nyko grip, making it a great choice for iPhone gamers. Hori drops the ball on this, and takes itself out of contention.

I can forgive the analog sticks here; they’re a big of a downgrade, but still good. I can forgive the lack of iPhone grip – it sucks for iPhone gamers, but it would still make this controller a good choice for iPad and Apple TV gamers. The relatively bad triggers seal the deal, though. Hori was probably right to switch from buttons to triggers – in 2016, more games are designed for triggers than are designed for shoulder buttons. They just needed to do a good job, and they didn’t even come close.

If you want the absolute best d-pad you can get on an MFi controller (and are willing to forgive the triggers), the Horipad Ultimate is a perfectly solid controller at a great price. It just isn’t as good as the Nimbus – that’s the problem. The Nimbus’ d-pad isn’t great, but it isn’t close to being as bad as the Horipad’s triggers. Combine that with the Nimbus’ superior analog sticks and general build quality, and you can see the problem Hori has. They made a perfectly good controller, but the competition improved further.

The Nimbus is objectively better than the Horipad Ultimate in several major ways, but if you do buy the Hori, you’ll be perfectly happy. Its a fine controller. If you’re a hardcore retro gamer, you’ll love it. But if not, you should probably stick with the Nimbus.