At long last, the controller I’ve been waiting for is here.

For many, a Bluetooth controller, console-style, perhaps with a phone grip, is the perfect design. But while I’ve diligently reviewed these controllers, I’ve never particularly liked that form-factor. Even at it’s best, Bluetooth is finicky. Phone grips are nice to have, but the angle they hold the screen at has always been unpleasant to me. These controllers work great for playing on a TV, but to me, they just don’t feel suited to mobile play. 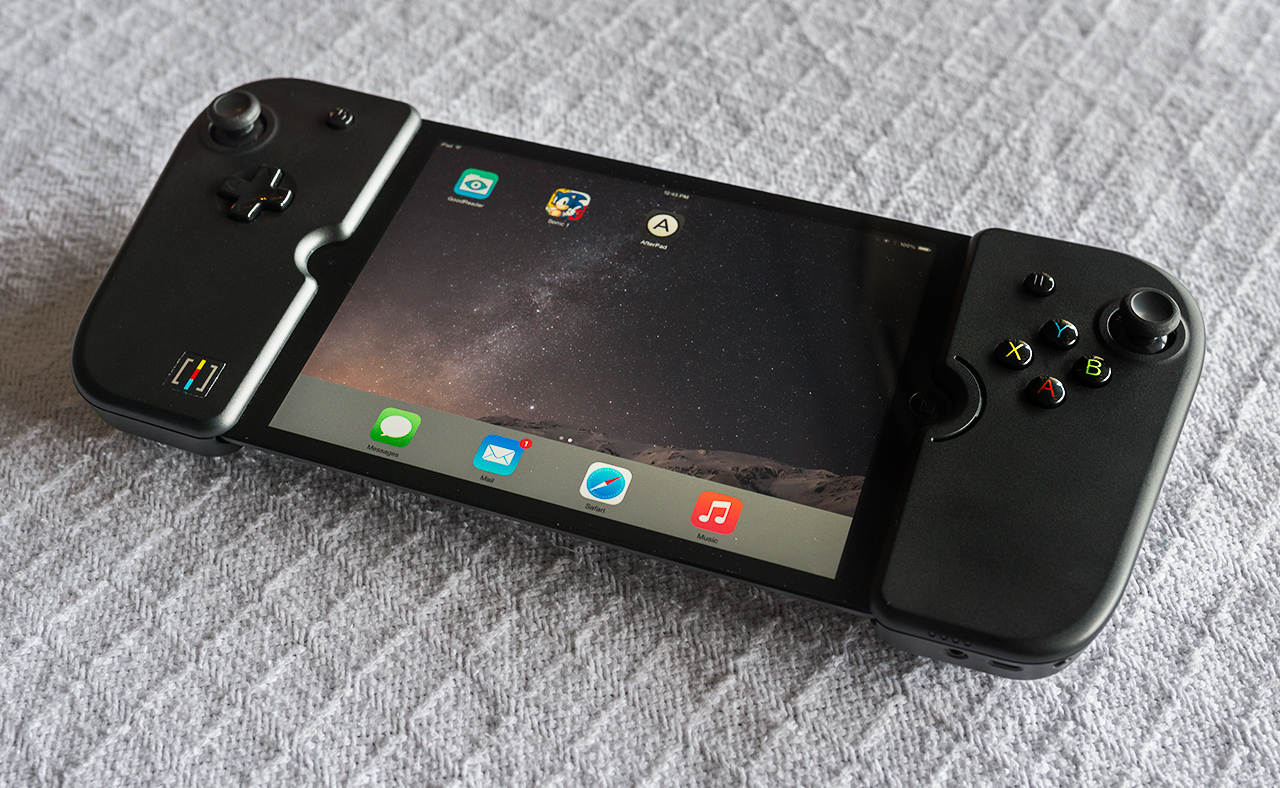 This review might re-tread familiar territory for those of you who’ve read my extensive Gamevice Preview article. But as this review will make clear, much has change between today’s Gamevice and the one I first used at CES. Pretty much every nitpick I had has been corrected, every rough edge polished, leaving a practically perfect controller.

In my opinion, the Gamevice is the best MFi controller ever made. But it’s also not for everyone. That statement might sound strange, but I’ll attempt to go over everything, good and bad, in this review, and explain exactly why I’ve reached the conclusions I have.

Everything about the Gamevice feels premium. This should be expected from the $100 price tag, but is isn’t always the situation.

The plastic is nicely matted thoughout, with a surface texture reminiscent of the aluminum shell of the iPad itself. The buttons and triggers are a glossy, thick-feeling plastic.

Connecting your iPad Mini to the Gamevice is painless. Insert the iPad Mini (any version), Lightning-side-first, into the Gamevice, then pull the other half of the Gamevice outward and slip it around the other end of the iPad. The connection is snug – the Gamevice uses tension to pull both halves gently into the iPad, keeping it from wobbling. iPad cases are not supported, but I’ve never been a case person anyways.

The Gamevice’s shape is arguably its most unique – and controversial – feature. Unlike every other controller I’m aware of, the handles are angled away from your hands. Instead of your wrists facing inwards to grip the controller, they face outwards. The reason for this design was explained to me by the CEO of Gamevice as such: your hands grip inwards when holding a regular controller because of how small the controller is. Widen the controller, and your hands will naturally bend outwards.

That’s how it works in theory, anyways. In practice, I think the folks at Gamevice were a little too clever for their own good. The outward handles of the controller might make sense if the controller was wider than the distance between your arms. The thing is, an iPad Mini and a Gamevice just aren’t that wide – for me at least, they’re very close to the width between my arms. So my wrists end up being bent slightly outwards when holding this controller.

This isn’t the end of the world, but it gets a little unpleasant after several hours of continuous play, especially while lying down. Making the sides of the controller perfectly parallel would have made sense – indeed, this is the approach Nintendo took with their Wii U gamepad, and it’s the one Gamevice prototyped before redesigning their controller to the current form.

This inverted handle design might turn out to be more comfortable with the larger size of the iPad Air Gamevice. As it stands with the iPad Mini, they overthought this situation and made the controller a little bit less perfect than it should be.

A good controller is more than the sum of its parts. But those parts still count for something. Many MFi controllers have been great in most ways, but suffer one fatal flaw or another in the details – the Stratus XL has terrible triggers, the PowerShell has a painful d-pad, the Stratus has flimsy analog sticks. Does the Gamevice have any deal-breaking flaws? Read on.

The analog sticks establish what turns out to be a common pattern with the Gamevice: borrow the best aspects of the Xbox One controller. Just like an Xbox One controller’s analog sticks, these are pleasantly rubberized, concave, and full-size. They feature a ridged rim around the edges of the stick, creating an exceptionally grippy surface that your thumbs will never slip from.

The Gamevice uses concentric rings for the edges of the analog sticks. It isn’t quite as pleasant as the cross-hatched ridge on the Xbox One controller, but it feels almost identical, and it’s far superior to the stick design of any other MFi controller. In fact, it’s probably the second best analog stick design I’ve used, just behind the Xbox One’s.

After relatively heavy play for the past 9 months, the rubberized ridges show minimal wear, and still grip my thumb perfectly. This serves as a testament to how much better this stick design is to the Xbox 360’s, which wears down notoriously fast.

The face buttons on the Gamevice are perfect. They’re large – the same size as those on an Xbox controller, and slightly smaller than those on a PlayStation controller, making them perfect for pulling off difficult button combos. They’re rounded off, with a pleasant beveling that prevents the type of thumb pain I find my self getting after extensive gaming sessions on a Wii U gamepad. They’re double-shot plastic, meaning the colors on the buttons are never going to fade, no matter how much you use them. They activate smoothly, meaning they’ll never have the sort of plastic-on-plastic grind a few controllers occasionally exhibit.

As I said, they’re perfect.

The Gamevice has by far the best d-pad of any MFi controller. Just one look goes a long way towards telling you why. This is the only MFi controller without the dreaded circular d-pad. Many of us assumed that Apple’s MFi spec required controllers to have circular d-pad; this was inaccurate. The Gamevice’s d-pad fits perfectly well within Apple’s standard, thus making the terrible d-pads on (almost) every other MFi controller even less excusable.

The Shoulder Buttons and Triggers

The triggers and shoulder buttons are as close as the Gamevice comes to having a weakness, and they’re still not bad.

Ironically, the problem here is that the Gamevice copied the Xbox One controller almost perfectly, and the Xbox One has a flawed shoulder button design. Unlike the excellent shoulder buttons on the Xbox 360 controller, the Xbox One changes the shape of the upper shoulder bumpers such that it’s difficult to reach them with the side of your pointer fingers. You either have to adopt a middle-fingers-on-the-triggers grip, or you have to reach your finger awkwardly around from the triggers to the upper shoulder buttons. It would have been nice if the Gamevice had corrected this problem, but no such luck. It’s better than many controllers, but it’s a slight blemish on an otherwise great design.

In my preview of the Gamevice, I mentioned some roughness activating triggers. This was corrected in the final controller – the triggers are smooth, pleasant, and activate with a nice (though light) degree of pressure. It would just be even nicer if moving your finger between the triggers and shoulder buttons wasn’t so awkward.

Using one micro USB cable, you can simultaneously charge both the Gamevice and the connected iPad. This is an essential feature for marathon game sessions, and I’m happy to say it works exactly as expected here. This may seem obvious, but the MOGA Ace Power doesn’t charge the iPhone it’s connected to while the controller is charging.

Audio output for the Gamevice is handled via an integrated headphone port. This means the Gamevice itself handles audio decoding, rather than the iPad. This had issues in prototype versions of the iPad – the left and right stereo channels were inexplicably reversed on most of the prototypes I used – but this issue appears to be resolved on the final version. Sound quality is good, though not quite as good as the sound from the iPad’s integrated headphone jack. It’s perfectly serviceable for gaming, but disconnect the Gamevice when it’s time to listen to music.

There has been some confusion about exactly which devices the Gamevice is compatible with. Let me be clear: the Gamevice I’m reviewing today – the only Gamevice currently available – is exclusively compatible with the iPad Mini, iPad Mini 2, iPad Mini 3, and upcoming iPad Mini 4. I have personally used a prototype of the iPad Air version, but not nearly enough to review it at this time.

This leads to an important point: in terms of gaming performance, the iPad Mini line is the weakest line of iOS products Apple sells.

When the Gamevice was first conceived, this wasn’t the case. The iPad Air and iPad Mini 2 were equally powerful, meaning there was nothing to dissuade gamers from buying the smaller iPad, and the folks designing the Gamevice from targeting those gamers. Then Apple changed the rules. The iPad Air 2 was released as a quantum leap in performance over every other iOS device, whereas the iPad Mini 3 was stuck with the same aging A7 processor from the previous generation. Suddenly, gamers had a clear reason to opt for the larger iPad Air and avoid the Mini.

That is not to say the iPad Mini is a bad device for gaming; it’s actually quite excellent. The A7 chip in the Mini 2 and Mini 3 and A8 chip in the Mini 4 are more than capable of holding their now. The problem is, they’re far weaker than the chips in the larger iPads, meaning most hardcore gamers would probably opt for the larger devices, making the market for a hardcore iPad Mini gaming accessory potentially small.

I can’t help but feel that the upcoming iPad Air version and iPhone version of the Gamevice will be much better – and more successful – products.

I can’t tell you whether or not you should spend $99 on a controller. What I can say is that this is the best MFi controller ever. I can tell you that unlike other controllers that launched at this price point, the build quality actually reflects the asking price.

The only thing holding me back from wholeheartedly recommending the Gamevice is the exclusive compatibility with the iPad Mini. The Gamevice is an incredible controller, but as a gaming device, the iPad Mini is questionable. Investing $99 dollars into a controller that only works with Apple’s weakest iOS device might be a mistake. The iPad Mini 4 remedies the issue somewhat by including an A8 processor, but that still places it firmly at the bottom of Apple’s range. The Gaming iPad is unquestionably the iPad Air, and that version of the Gamevice makes a lot more sense to me.

But that’s a topic for another review. The fact of the matter is, if you want the best controller you can possibly get for your iPad Mini, this is it. In fact, the Gamevice is far and away the best MFi controller, period. The price is intimidating – $99 is twice as much as other perfectly serviceable controllers – but the Gamevice is more than twice as good as the competition.

My iPad Mini no longer leaves my Gamevice; this is how I play iOS games now.