Everything about the Speedy has been a low-key affair. 6 months back, PXN Speedy’s designers emailed me out-of-the-blue and told me about their new controller. A few months later, they sent out a review unit. And a few weeks back, with no fanfare, the controller started showing up on Amazon. All with no promotion; to my knowledge, AfterPad is the only iOS blog to so much as mention the Speedy. 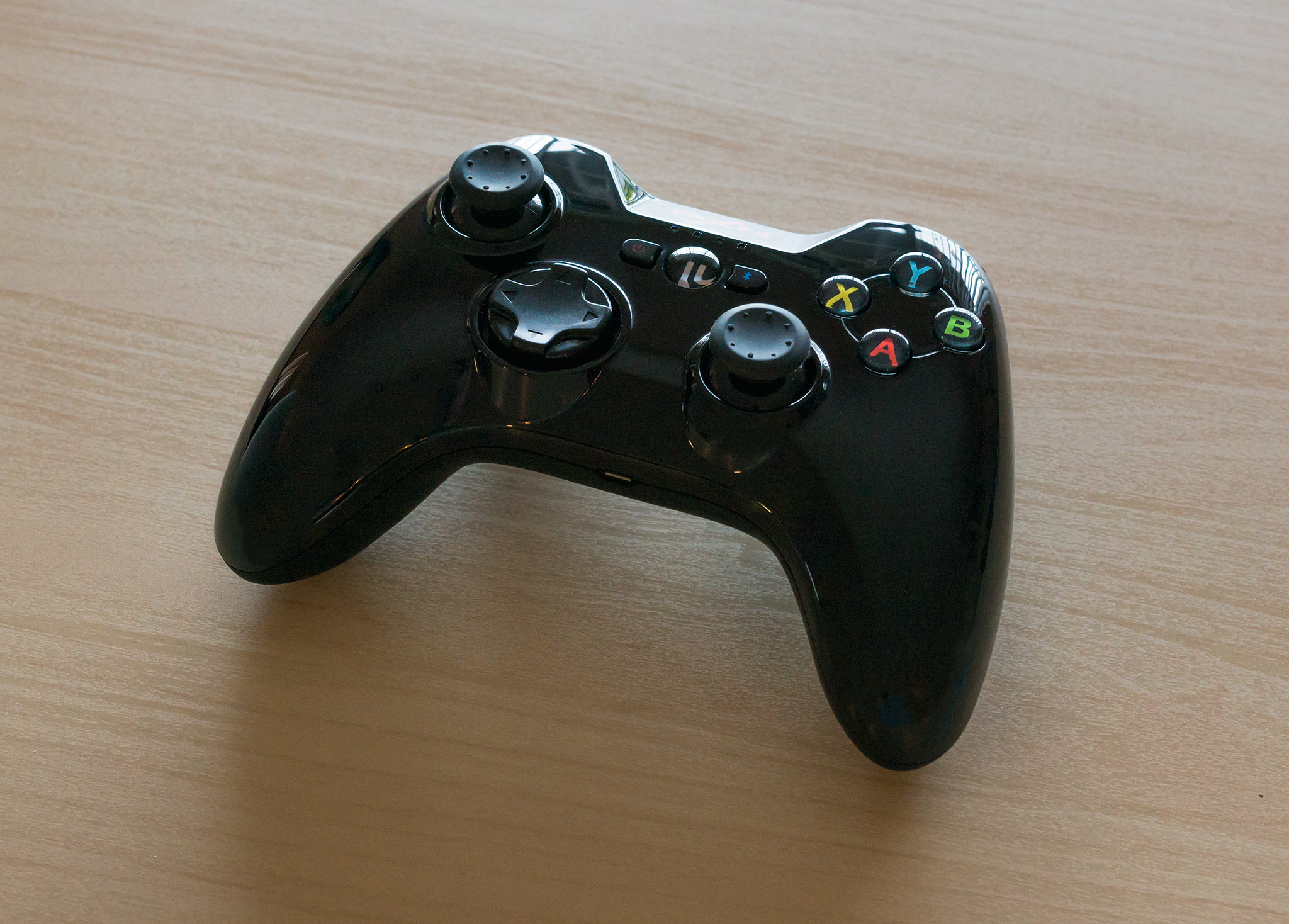 While superficially similar to the C.T.R.L.i, the Speedy lacks Mad Catz’ aggressive branding and unnecessarily angular design. This makes the Speedy a more comfortable controller. In fact, the Speedy is one of the most comfortable of all MFi controllers – the shape is rounded to fit your hands, the screw holes are placed such that they don’t dig in to your fingers, the front plate connects to the back without any unpleasant overlap, there are no superfluous physical indentations or designs.

My one issue is the back of the controller. It’s of soft-touch plastic – that slightly rubberized plastic that takes on a dry, smooth texture. Maybe it’s just me, but I personally find ALL soft-touch plastic unpleasant. Sort of like the touch equivilant to the sound of nails on a chalkboard. I was prepared to dislike this controller based on the materials used to make it. But even with my bias against soft-touch plastic, I simply cannot complain about the Speedy: it’s a damn good feeling controller. Heck, if you don’t share my bias against the material, you might prefer the feel of the Speedy’s plastic to the material other controller makers use – it’s certainly unique.

The analog sticks are going to be one of the biggest draws for the Speedy. Unlike most of the new controllers hitting the market, the Speedy has the staggered analog stick layout associated with Xbox controllers. To some people – perhaps those who grew up playing on the Xbox – this is a big point in favor of choosing the Speedy over the Nimbus or the Horipad Ultimate.

Good news: these gamers are going to be very satisfied with the Speedy. These sticks feel like they’re ripped right off of an Xbox 360 controller – same shape, same height, same material, same layout. Your muscle memory from the 360 controller will translate immediately to the Speedy. 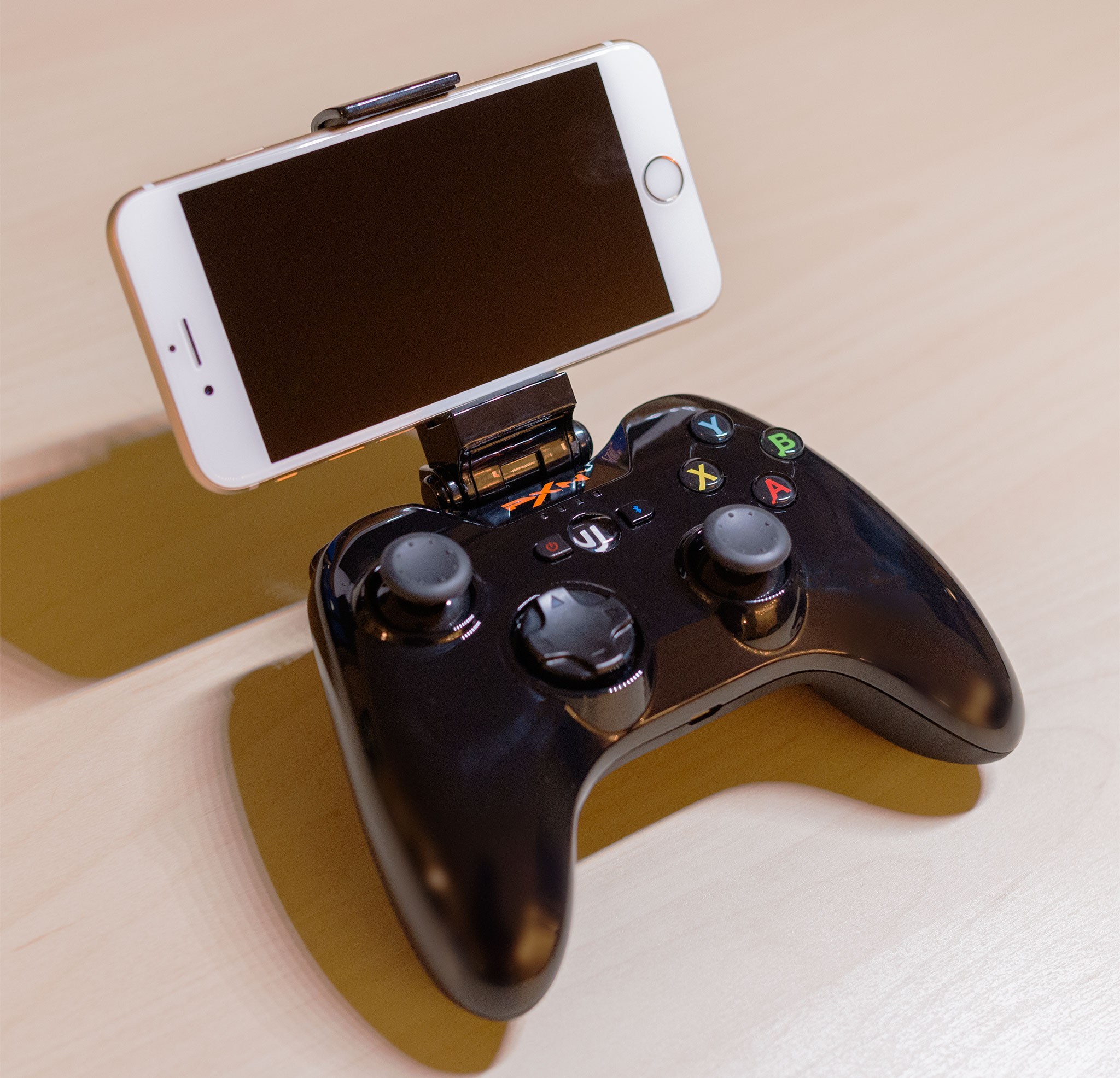 Objectively, I’ve never particularly loved the 360 controller’s analog sticks, and the Speedy doesn’t change my opinion. If you have no affinity for the Xbox 360 controller or its layout, the Nimbus and Gamevice have better, grippier analog sticks. The Speedy’s sticks are grippy, but if they turn out to age like the 360 controller’s sticks, the grippy texture will wear off after 6 months. I’ve been using the Speedy for about 2 weeks without issue; if this changes, I’ll update this review accordingly.

The D-Pad is the Achilles heal for most MFi controller makers. We’ve had a couple of good d-pads – notably on the Gamevice and Horipad – but the vast majority are terrible. The MFi controller most similar to the Speedy – the Mad Catz C.T.R.L.i – was great in pretty much every way, but was saddled with one of the worst d-pads ever made. Most other MFi controller’s weren’t much better. Apple’s requirement that MFi controllers have a circular d-pad seems to have been too much for most controller makers to handle.

The Speedy changes the game. To put it simply, this is one of the best d-pads available on any MFi controller. Easily in the top 3 with the Gamevice and Horipad. Better than the Xbox 360 controller’s relatively terrible d-pad. 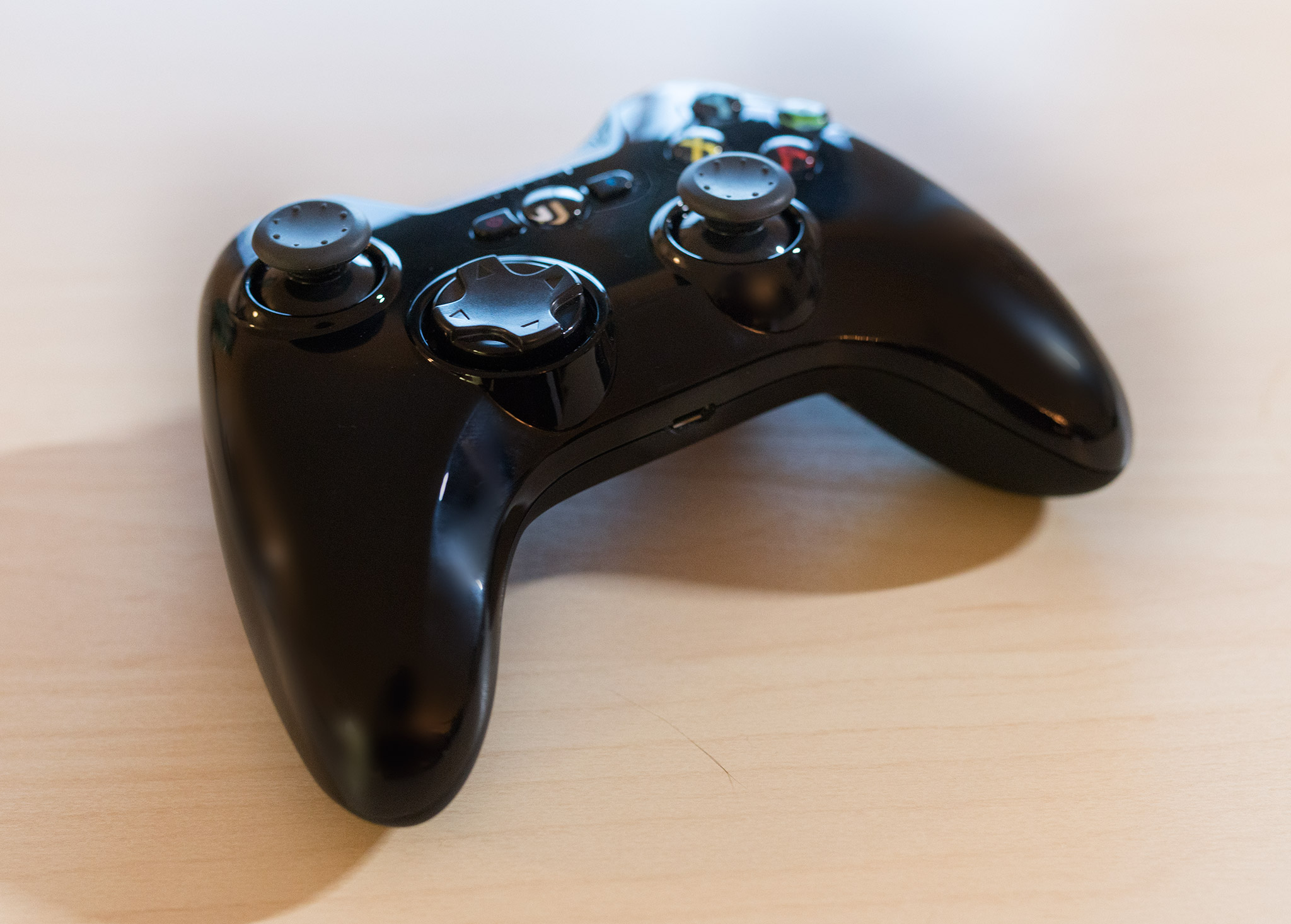 The Speedy’s d-pad is outstanding

This d-pad is pleasantly clicky along all 8 axis, lacks any of the mushiness associated with the C.T.R.L.i or TteSports pads, and is intuitively textured to make it easy to hit whatever direction you’re going for, including diagonals. It’s loose enough to be easy to activate at full pressure – almost too loose, if I had to nitpick, but far better than most of the other options.

I have no complaints with the ABXY face buttons on the Speedy. They’re about as large as a 360 controller’s buttons, they’re generously spaced between each other, they’re pleasantly rounded, and they have a glossy texture with a perfect amount of grip. 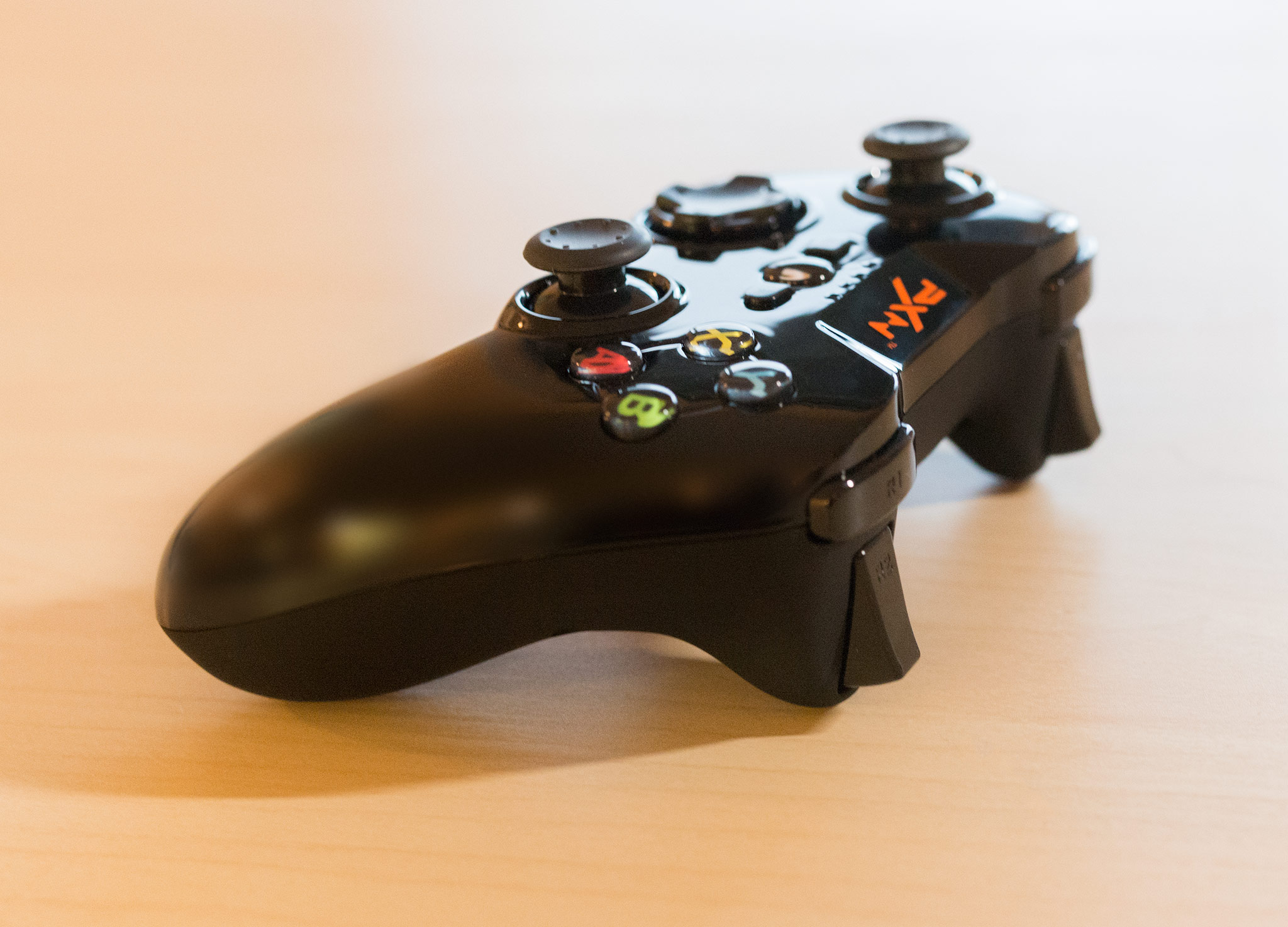 The Speedy sticks the function buttons – Pause, Power, and Bluetooth pair – into a small cluster in the center of the controller, very reminiscent to the 360 controller’s buttons. This was a mistake. There is no similarity in functions to these buttons – you press the power button once or twice for every time you use this controller, you press the Bluetooth button less often than that. 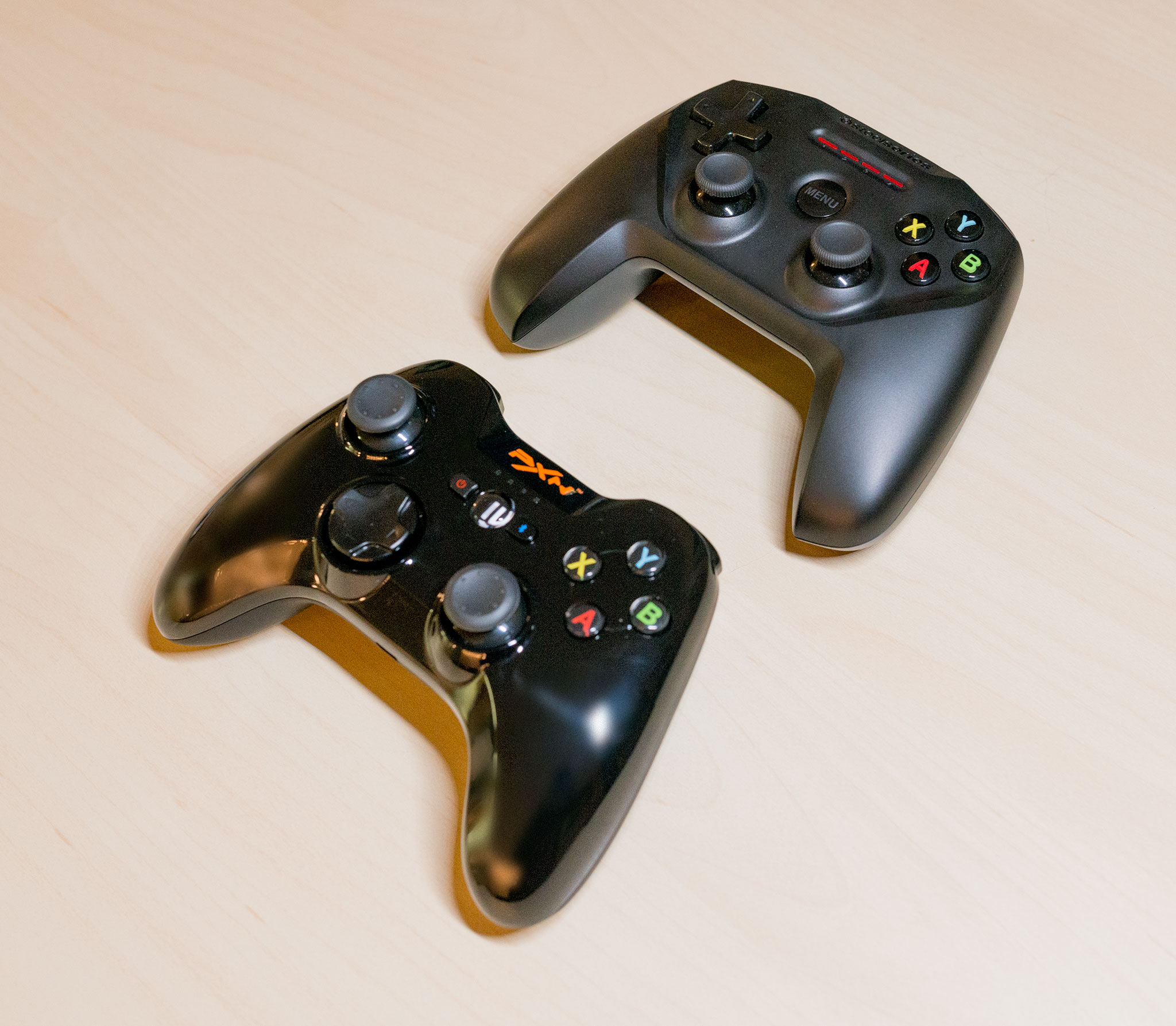 The problem is, you press the pause button all the time. And placing the Pause button right in the middle of the two function buttons makes it difficult to reach the pause button by feel. More often than not, I found myself accidentally pressing the Bluetooth pair button when I meant to pause the game. Not the best design, but not enough to prevent me from recommending the Speedy.

One of the biggest points in favor of the Speedy: it’s attachable iPhone grip. If you’re an iPhone gamer, it doesn’t matter how good the Nimbus or Horipad are; you can’t attach them to your device. Every MFi controller should come with an iPhone grip; most do not.

The good news: the Speedy has a pretty good grip. Not the best – that honor goes to the TteSPORTS Contour – but better than some of the others. The Speedy’s grip screws in to the bottom of the controller, resulting in a sturdy, solid connection. The grip itself opens wider than any of the other controllers’, and is easily large enough to support an iPhone 6s Plus in a case. 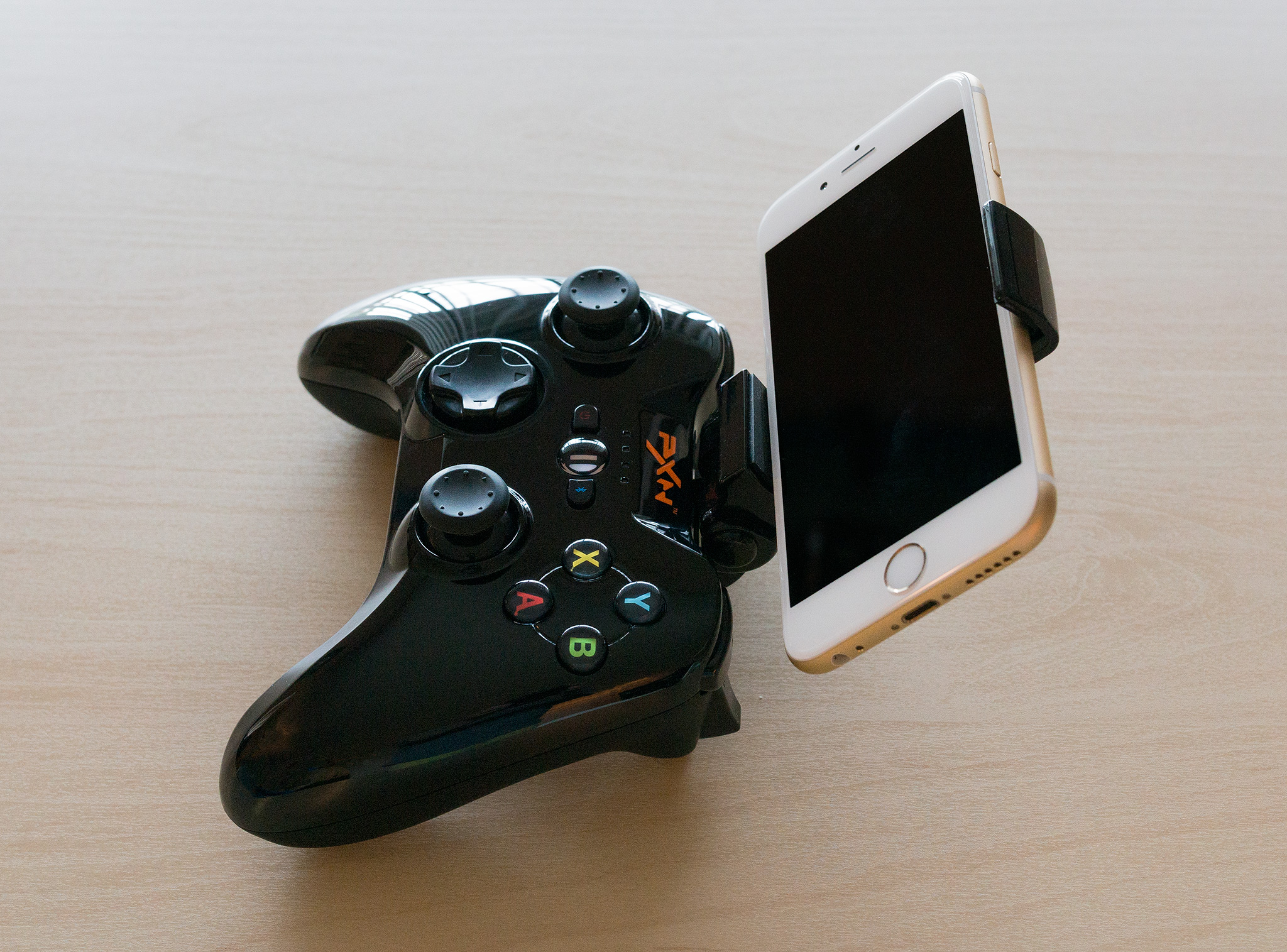 The Speedy’s grip is sturdy and adjustable

The Speedy’s grip has one unique feature: it has an adjustable hinge, allowing you to change the angle at which it holds your iPhone. Sounds great in theory, but in practice, the widest angle is no wider than any of the other MFi controllers. In my opinion, all of these controllers grip your iPhone at too sharp of an angle, so the Speedy’s ability to angle it even sharper doesn’t interest me. This was a missed opportunity.

The battery is yet another area where the Speedy pulls ahead of the C.T.R.L.i: the Speedy’s battery is rechargeable. The internal battery is rated at about 30 hours a charge, and takes 2 hours to charge via in an included micro-USB cable. 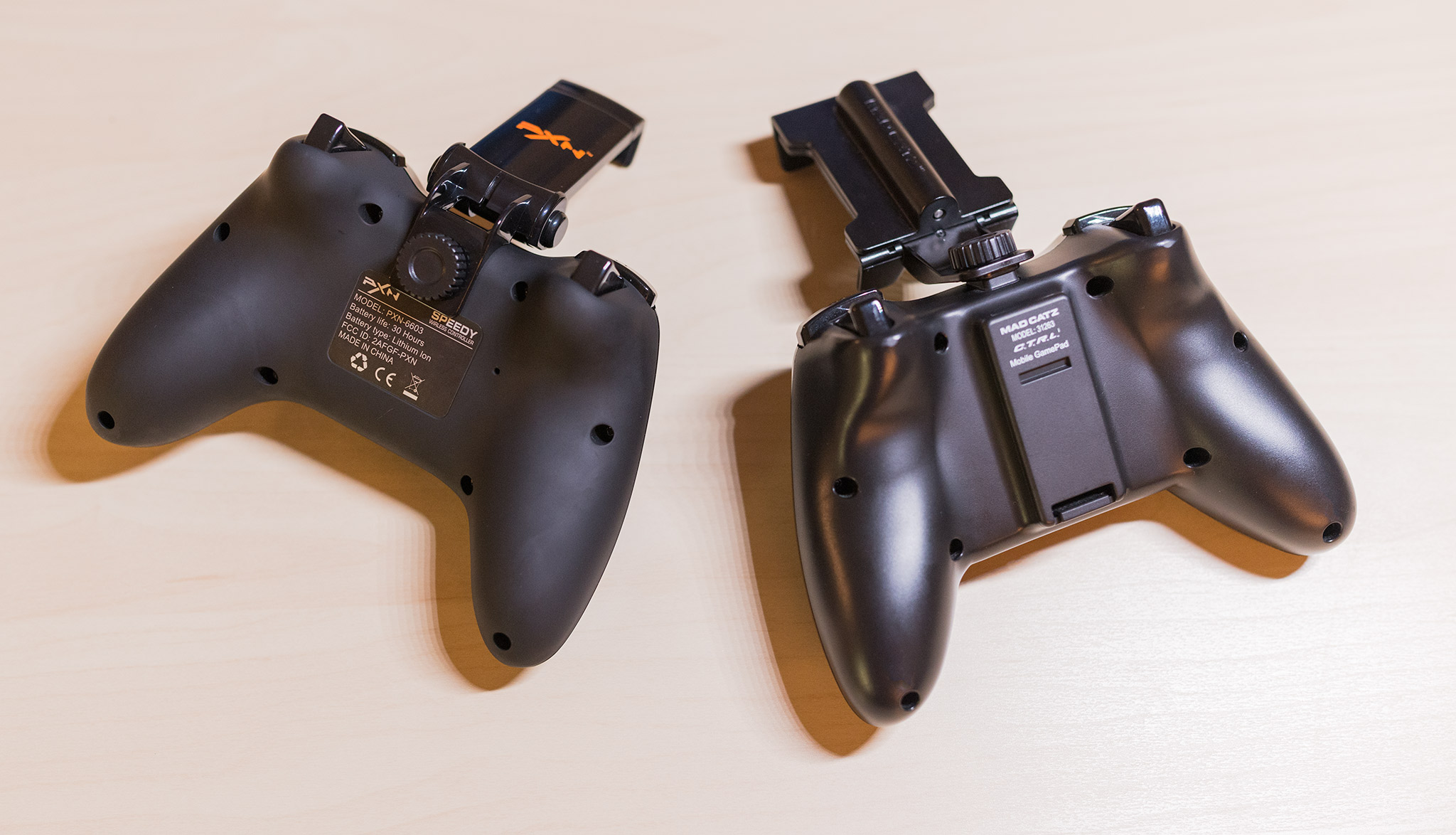 Speedy (left) vs C.T.R.L.i; not the soft finish and rechargeable battery

If you’ve read my other reviews, you know I’m a fan of internal batteries. The Speedy’s battery isn’t quite perfect – it uses Micro USB instead of Lightning – but it’s pretty good nonetheless. Far better than the Mad Catz controllers, which require fumbling around with non-Apple-standard AAA batteries when your controller dies.

It’s amazing to me that the PXN Speedy was able to arrive out of nowhere – with little fanfare, into a market crowded with established players – and yet it’s one of the very best MFi controllers available.

If you don’t care about having an iPhone clip, you might have better options. The Gamevice is a superior controller for compatible iPads, and the Nimbus is a more modern and polished controller for the Apple TV. But if you’re looking for a controller with a grip to use with your iPhone, the Speedy is the top of the heap. It’s built almost identically to the Mad Catz C.T.R.L.i – a controller which I reviewed very highly – but features a vastly superior d-pad and an integrated battery. 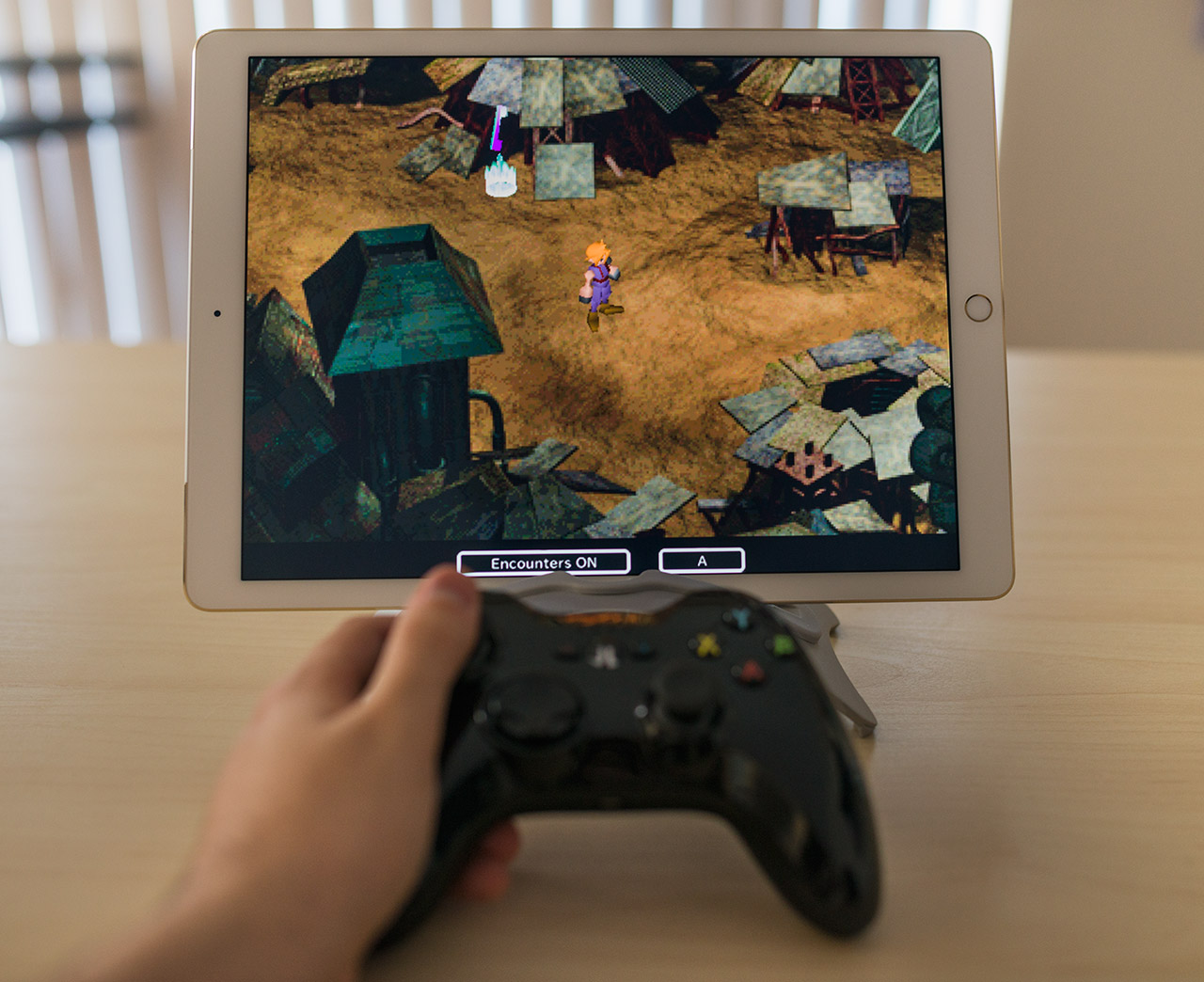 Then again, creating great products is how brands become established. And this is a great product. The PXN Speedy has dethroned the Mad Catz C.T.R.L.i, and is now the best MFi controller with an iPhone grip. It does everything well, doesn’t have any serious weaknesses, and is fairly priced. As far as I’m concerned, that makes this an easy recommendation. If you want an Xbox-360-style controller with a great iPhone grip, the PXN Speedy is the best you can get.