The iPad Gamevice has long been my favorite MFi controller. Ever since I used an early prototype of the iPad Mini model, I’ve been convinced that the Gamevice is the best way to play iOS games. If you’ve seen my review of the smaller Gamevice, you know the general gist of what I’m going to say here. I love the form-factor, the build quality is excellent, and the price – while high – is reasonable for the quality of the product. The question with this larger device is simple: does the Gamevice form-factor still work on a big-screen iPad?

Unlike its predecessors, the 12.9-inch iPad is large enough to be comfortably used on a table, like a small TV, and controlled with a wireless Bluetooth controller. Some gamers might prefer this, but I’m not one of them. To me, this play style fails to take advantage of what the iPad has to offer as a gaming device – it turns the iPad into a (rather tiny) Apple TV. The beauty of the iPad has always been in the way you can hold it in your hands and directly control what is happening. There’s an intimacy to iPad gaming – it is fundamentally different than console and PC gaming, and you lose this intimacy when you use a traditional Bluetooth controller with your iPad. 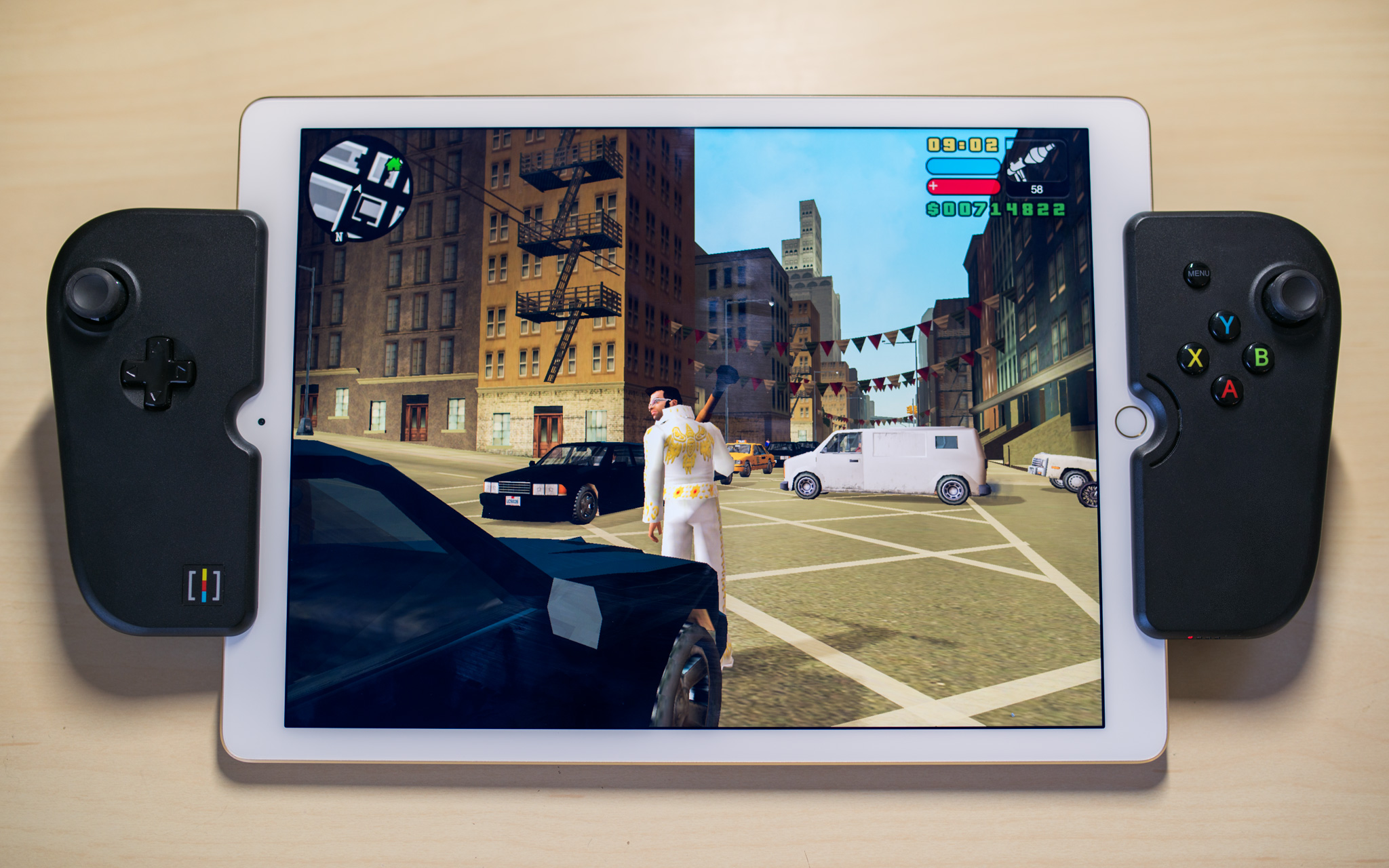 The Gamevice is different from other iOS controllers. It embraces everything great about the iPad, rather than trying to turn the iPad into something it was never meant to be. And unlike with the iPhone Gamevice, the design and build quality of this iPad Gamevice model is excellent.

When the iPad Mini Gamevice launched two years ago, it had a better d-pad than every other MFi controller – by leaps and bounds. Amongst a sea of mushy circular d-pads, the Gamevice launched with a responsive, plus-shaped design. The competition has improved since then. The PXN Speedy, Horipad (regular and Ultimate), and SteelSeries Nimbus all have better d-pads than any of the Gamevice’s old competitors. Many of them even feature plus-shaped d-pads.

Because the original Gamevice was so far ahead in its original design, it still holds up against its new competitors. It isn’t quite as nice as the d-pad on the new Horipad Ultimate, but it’s a close second. The size is perfect, the texture is pleasantly grippy, and it is calibrated well enough to prevent accidental diagonal movements, without making these movements too difficult. If I’m nitpicking, it is a bit stiffer than I’d like – you have to press a bit harder than you should to activate it, which is why I’d rank the Horipad Ultimate’s d-pad a little higher. But overall, this is a great d-pad, and fans of retro games should be happy with the Gamevice.

Some early-production-run 9.7-inch iPad Gamevices suffered from major calibration issues, leading to significant analog stick dead zones. In short, you had to push the analog sticks noticeably far before they start registering movement, and the analog sticks think they’ve reached the end of their range well before they’ve actually been pushed all the way to the edge. Deadzones can cause issues in any game that requires responsive, precise motion. Because there’s a buffer between when your thumbs start moving and when the controller starts reacting to your thumbs’ movement, it can often feel like what’s happening on screen isn’t corresponding to what you’re doing on the controller. Camera movement that is supposed to be gradual instead feels sudden. Characters move in octagonal patterns instead of fluid, 360-degree motions.

This 12.9-inch Gamevice model is significantly improved from its predecessor, but not as much as I was hoping. Things have gone from terrible to adequate. It has the worst deadzones of the three modern MFi controllers, by far. The people at Gamevice have known about this problem for over half a year, and have been in direct contact with me throughout the prototype phase. I was hoping that this problem would be resolved. As it stands, the deadzones on this Gamevice don’t ruin the controller, but they are well behind those of the SteelSeries Nimbus and the Horipad Ultimate.

The Gamevice’s ABXY buttons have the exact same same size, shape, texture, and layout as an Xbox controller – medium-sized buttons, generously spaced away from each other, with a convex outer surface. These buttons are unchanged from the previous iPad Gamevice models, and thats a good thing, because they’re pretty much perfect.

The three-dimensional ABXY buttons on the SteelSeries Nimbus look a bit cooler, and are a bit larger, but the more generous spacing between the Gamevice’s buttons make for a better playing experience.

In my experience, the games that make the most demanding use of the ABXY buttons are button-combo-based games like Tekken and Tony Hawk’s Pro Skater. I spent time playing both of those via emulation, and no matter how intricate the button presses, the Gamevice never missed a beat. These buttons are first-rate.

Poor-quality triggers have ruined multiple MFi controllers. Thankfully, the triggers on the iPad Gamevice are excellent. They’ve been excellent ever since the very first iPad Mini model, and they’re still top-quality. The texture is grippy, the sensitivity is perfect – nothing to complain about here!

The shoulder buttons are similarly solid. They’re a bit more recessed than I’d like, requiring you to strain your fingers just a little bit more than would be ideal. But this is just nitpicking – considering how badly some of the other controllers dropped the ball with their shoulder buttons and triggers, the Gamevice deserves credit for getting this right.

The biggest upgrade to this 12.9-inch iPad Gamevice is something you can’t see – way it manages power has been completely redesigned. Previous Gamevice hardware included dedicated batteries. These batteries didn’t supply power to the iPad, nor could the Gamevice draw power from the iPad once its integrated battery died. This never made sense to me, and I couldn’t get a straight answer from anyone about what the logic behind this was. Anyways, it’s gone now – the 12.9-inch Gamevice draws power directly from the iPad. That means no more keeping track of its battery life – when your iPad dies, your Gamevice dies; until then, game on.

In addition to removing the superfluous battery, this Gamevice finally ditches the Micro USB input, in favor of a female Lightning port. This is an extremely welcome addition – no more extra cable required to charge the controller! When you’re running low on power, you don’t have to remove your iPad from the Gamevice – just plug it in to your standard Lightning cable, and keep playing as long as you want.

One caveat: the Gamevice is only capable of passing through 12W of power to the iPad Pro from its Lightning connection. This is not enough to actually charge the 12.9-inch iPad Pro while playing performance-intensive games – merely enough to tread water. Apple solved this problem by releasing a 29W USB-C power charger and cable. Unfortunately, the Gamevice doesn’t take advantage of this high power charger, and instead caps the input to a maximum o 12W. I can’t think of any non-Apple devices capable of charging the 12.9-inch iPad Pro at full speed, so I think this is probably a restriction of the MFi program, rather than something to blame Gamevice for.

I rarely spend much time talking about controller software in my MFi controller reviews, because the software is rarely worth talking about. However, Gamevice Live is worth discussing in more detail, because it is more ambitious than software from other controller makers.

The Gamevice Live app (much like this website) is designed to be an interface for finding controller-compatible iOS games. It acts like a mini-App-Store, complete with featured app banners at the top, and genre-sorted sections for browsing catalogued games. Select a game, and the app shows you its iTunes description, price, and (for popular games) a map of the game’s controls.

Full disclosure: the Gamevice Live app is technically a competitor to my site. Although they paid me a lump sum over a year ago for one-time access to the AfterPad Game Database, I no longer have any ties to their app. Every game downloaded through the Gamevice Live app is a commission I don’t make on AfterPad. This is different than apps from other companies, where AfterPad supplies data directly to the apps, and I get a commission on app sales. I do, however, like the Gamevice, and I know and like the people behind the product. If you have any doubts about my ability to be objective, take the following with a grain of salt.

Even forgiving the blurry interface, the app doesn’t feel like it belongs on iOS. Scrolling is jerky and lacks rubber-banding, button presses are laggy and offer no visual feedback, there’s a hamburger menu at the top right that merely acts as a second way of loading the All Games screen, many of the graphics aren’t optimized for Retina, the list of genres includes a bunch of non-English entries… the list goes on and on.

If you still want to use Gamevice Live after this, you should save the Gamevice Live website to your bookmarks or home screen, instead of using the app. The website is the exact same thing, but without the incessant pop-ups, and with support for the iPad Pro’s screen support. Personally, I’ll be sticking with my own site instead – although I probably should borrow their idea of listing detailed control layouts for popular games.

If the form factor of the Gamevice appeals to you, buy it. The polish of the product and the quality of the gaming experience is well worth the price.