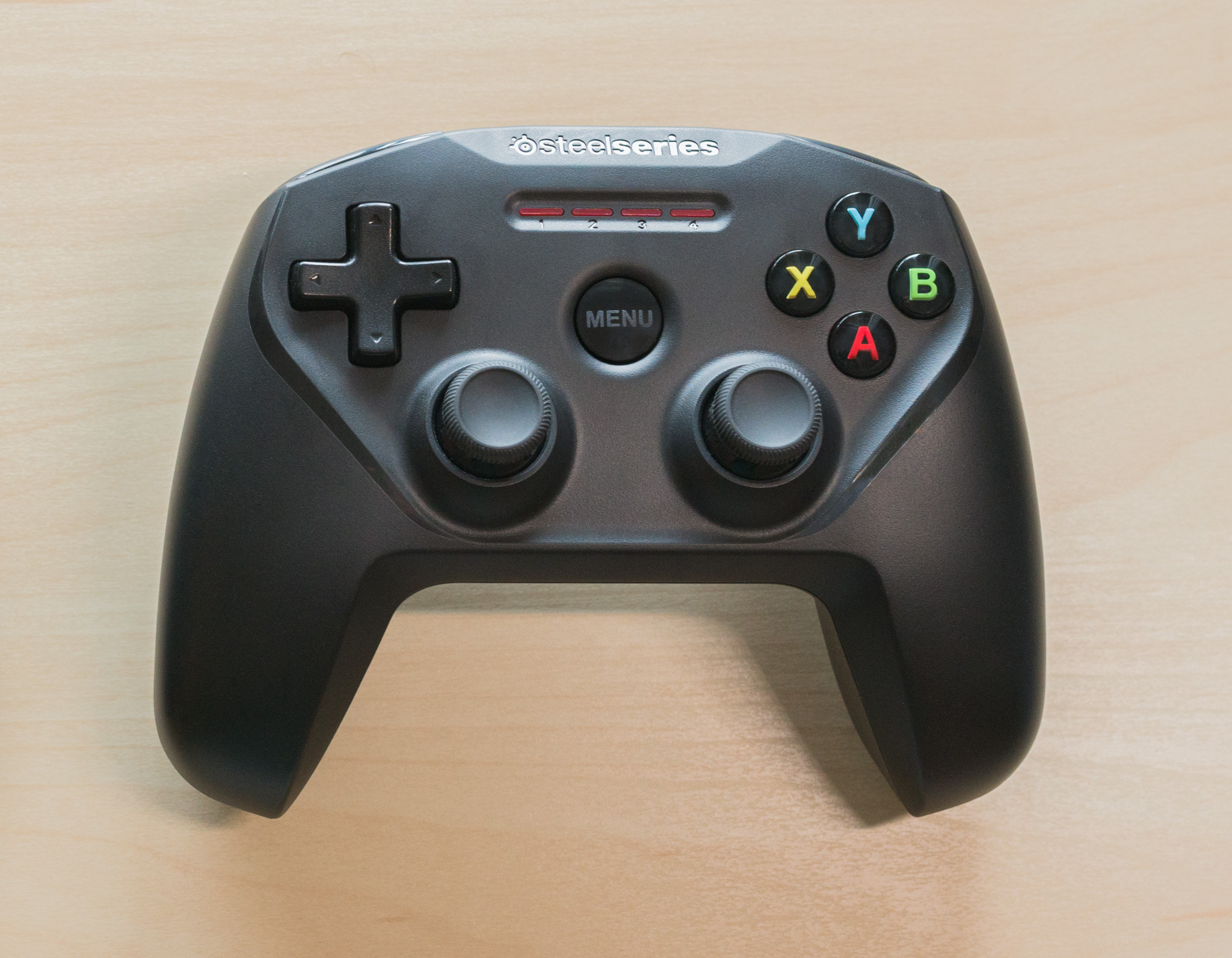 When I wrote my review of the SteelSeries Stratus XL, I ended it with the following:

One thing is for sure: I cannot wait to see the third Stratus SteelSeries makes. If it is as much improved over itâs predecessor as this controller is over the first Stratus, weâre in for a real treat.

To me, SteelSeries had two goals with their next controller, the Nimbus:

Similarly, the Nimbus has a defined target audience in mind: Apple TV gamers. The Nimbus works perfectly with iPhones and iPads, but for reasons I’ll get into throughout this review, it feels designed to go with the Apple TV even more than with these other devices.

SteelSeries has learned from their previous controllers. They’ve corrected the previous mistakes. They’ve included the latest technology. The results: the Nimbus is the best designed MFi controller ever made. It isn’t without flaws – I’ll get to those – but it represents the start of a new generation of controllers. The bar has been raised.

The Nimbus incorporates elements from Sony, Nintendo, and Microsoft controllers, but also features several touches that are distinctly SteelSeries. The analog sticks are pretty close to those of the Xbox one controller, though they’re laid out similarly to a PlayStation 4 controller. The D-Pad is reminiscent to (but worse than) Nintendo’s Wii U d-pad, thanks to an expired Nintendo patent and relaxed MFi controller standards. But the buttons, triggers, and industrial design have a uniquely SteelSeries identity.

The analog sticks on the Nimbus are the best of any MFi controller. They’re reasonably sized, almost identical to those of an Xbox One controller. The sticks’ concave surface and rubberized ridges give them a pleasant amount of grip. Deadzone is minimal, and the amount of pressure required to activate the sticks feels perfect.

The sticks are positioned in a traditional, non-staggered layout – analog sticks parallel, positioned below the d-pad and ABXY face buttons. Xbox gamers might balk at the layout, but unless you feel strongly about it, you’re not going to find anything to complain about here. 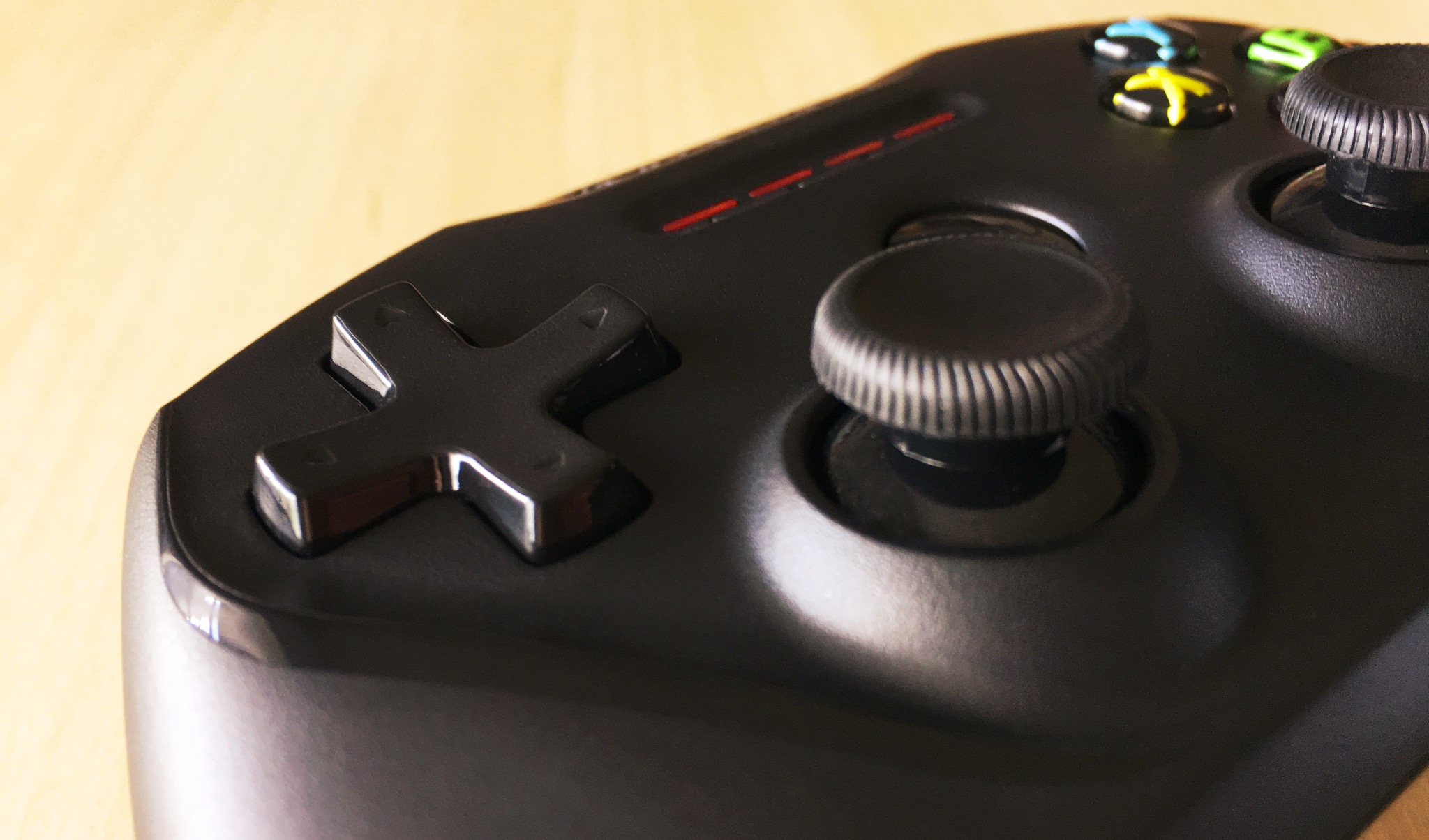 Good news: unlike every other SteelSeries controller, the d-pad on the Nimbus isn’t terrible. In most games, I’d go so far as to call it good.

Thanks to an expired Nintendo patent and relaxed MFi controller standard, controller makers are now able to use plus-shaped d-pads instead of circular pads. This is a mixed blessing. Plus-style pads make it much easier to avoid accidentally pressing diagonal inputs, but conversely, they can make it difficult to purposefully trigger diagonal inputs. This is the case with the Nimbus: it’s large, plus-style d-pad is wonderful for going along the standard axis – left, right, down, up – but anything in-between feels like a struggle.

The place where SteelSeries really dropped the ball with the d-pad is the size: it is way too large. One of the largest plus-style d-pads I’ve ever seen on a major controller. This large size is the chief reason why diagonal movement is difficult – side-scrollers and racing games work well, but not anything more complex than that. I can’t help but feel SteelSeries sized the d-pad for aesthetic concerns, rather than gameplay. This was a mistake – it’s the one big blemish on a controller that would otherwise be close to perfect.

The buttons on the Nimbus are pretty close to perfect. They’re large, pleasantly rounded, and beautifully designed. The plastic material is triple-shot – a transparent outer layer covers colored letters that are raised above a black base. It’s as beautiful here as it is on the Xbox One controller, where I first saw this style of button. 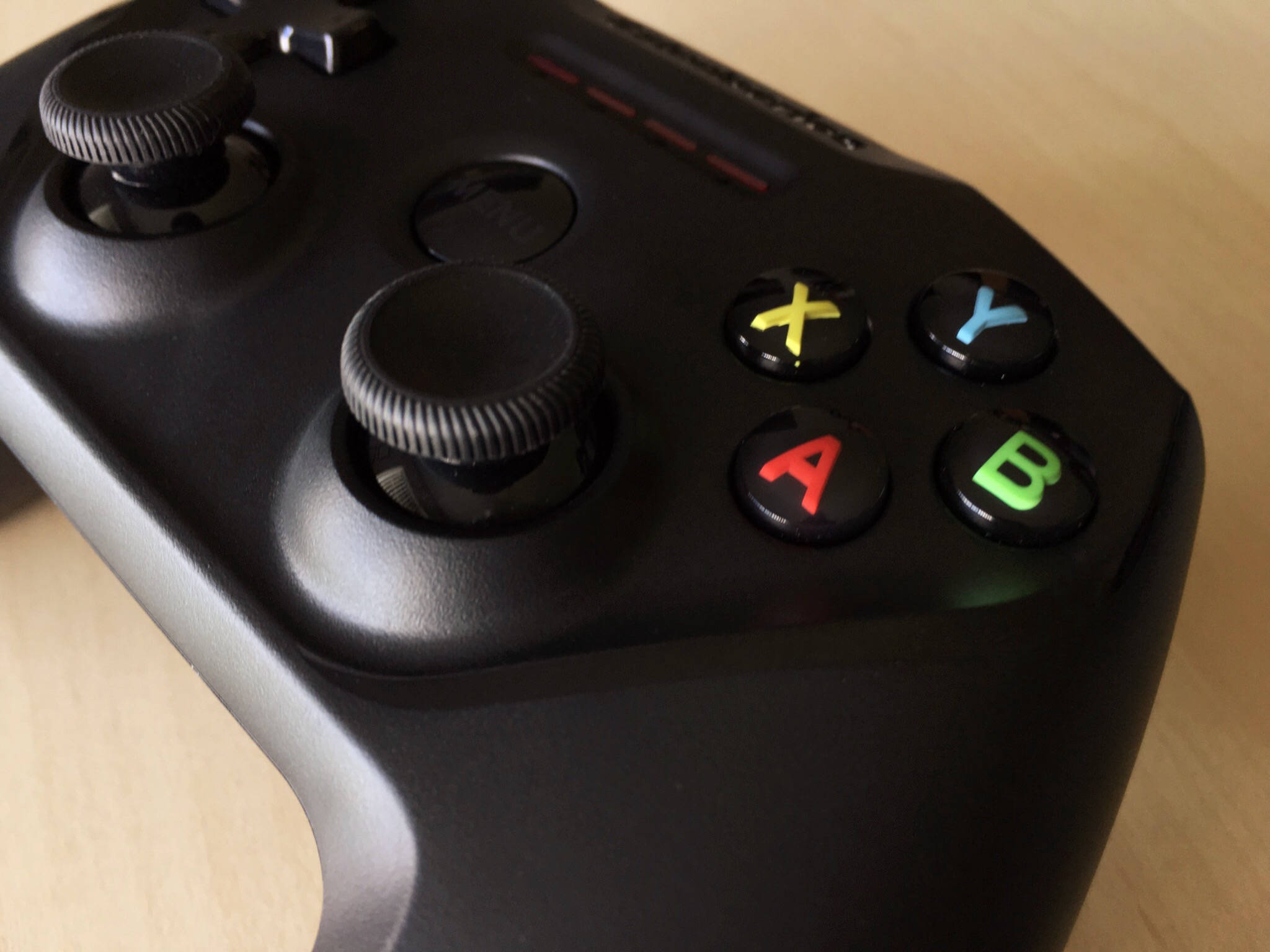 The Triggers and Shoulder Buttons

The triggers have, historically, been the Achilles heal for SteelSeries. The first Stratus sacrificed any semblance of quality triggers to keep the size down, resulting in 4 difficult-to-reach shoulder buttons. The Stratus XL switched to a modern trigger design, but botched the execution by using strings that were far too weak – resting your fingers on the triggers caused them to activate. I’d often find myself firing my gun accidentally, braking when I didn’t mean to – things I didn’t want to be doing.

The Nimbus corrects the problems from SteelSeries’ other controllers, and then some. These triggers activate with a perfect degree of pressure, yet feel smooth going in. Resting my fingers on the triggers had no negative side effects. Unlike other MFi controllers, they have a matte surface texture, which I found made them even grippier.

The shoulder buttons are similarly excellent. They’re positioned directly on top of the triggers, making them easy to reach, while also being placed far enough out from the triggers that you won’t accidentally activate them. 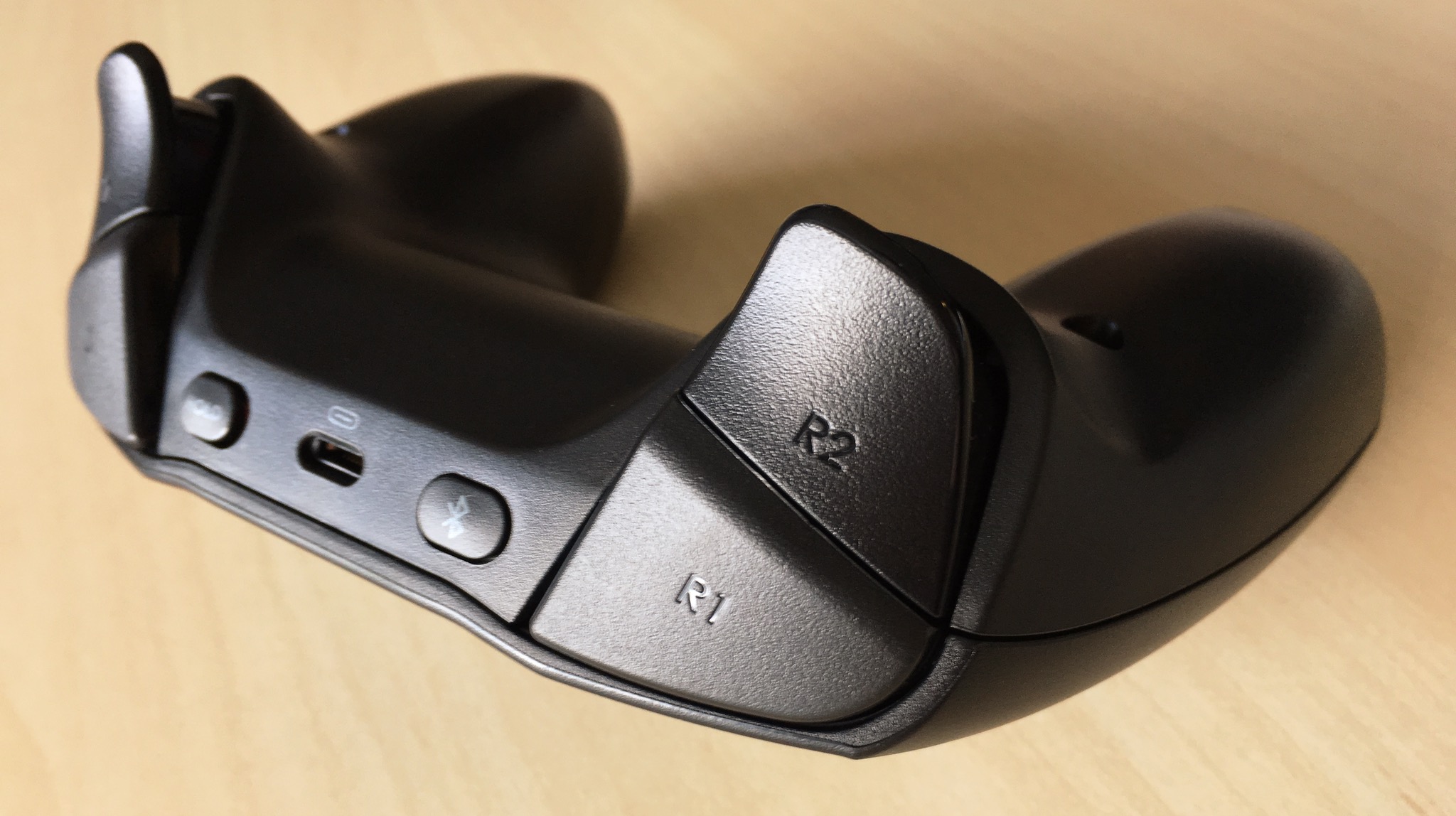 The battery in the Nimbus is one of the best in any MFi controllers. It’s rechargeable, fully integrated into the controller, and gets over 40 hours on a single charge. The extensive battery life is likely due to the fact it connects to iOS via Bluetooth 4.1, rather than the older Bluetooth 2.1 standard used by other MFi controllers.

Also unlike every other MFi controller: the Nimbus charges it’s battery via the Lightning connection. This is a first for MFi controllers. I can only hope the rest follow suit, because it makes things much easier. Other controllers either require non-Apple-standard Mini or Micro USB cables, or require removable batteries. A rechargeable 40 hour battery that is charged via Lightning is a vastly better experience. The only negative: a Lightning cable isn’t included in the box. You probably have a bunch lying around, but still, it would have been nice.

I’m happy to report that SteelSeries fixed the other big issue they had, aside from the triggers: updating the firmware on the Nimbus no longer requires installing dangerous kernel extensions! SteelSeries has an app, and you can use it to keep everything updated. Its a few years late, but certainly welcome!

There is still one glaring omission: the Nimbus lacks any form of grip for holding an iPhone. I’m not going to lie: this is baffling to me. Gripping your phone into a controller may not be the best way to play, but it is better than nothing. By not including a grip, or even offering one as an extra purchase, SteelSeries basically takes the Nimbus out of contention for iPhone gamers. Considering that iPhones make up the vast majority of iOS devices… I don’t know what SteelSeries is thinking here.

I won’t bandy words here: the Nimbus is the best Bluetooth MFi controller you can buy. It improves on the previous controllers from SteelSeries in every way, and leapfrogs most other MFi controllers on the market in some fundamental ways.

Build quality is top-class; comparable to first-party controllers from Microsoft and Sony. Every component feels “premium”, with the analog sticks and ABXY buttons being particularly first-rate. The only less-than-perfect component is the d-pad, and even still, it isn’t terrible.

The Nimbus is a step forward for the entire MFi controller platform. The internal components have been upgraded, and support a more modern and efficient Bluetooth version. Charging via Lightning means you don’t have to keep a second type of cable lying around.

So should you buy the Nimbus?

For the vast majority of Apple TV gamers, the answer is definitely yes. Those who absolutely cannot stand the Nimbus’ analog stick layout should consider the PXN Speedy instead, and those who require the absolute best d-pad should consider the original Horipad. But for most people, the search should end with the Nimbus: it’s that good.

iPad Air and iPad Mini gamers have an additional consideration with the Nimbus. Some people – myself included – would prefer to clip their iPad into their controller, rather than separating the two and treating the iPad as a small TV. If you fit that description, you’d probably be happier with the Gamevice. It’s more expensive, but it provides an experience optimized around the device you connect it to.

For iPhone gamers, the Nimbus is a tough sell. It doesn’t matter how premium a controller is if it doesn’t work with your device. The Nimbus lacks any way to grip to your iPhone. If you’re fine sitting your iPhone on a table and squinting at it to play, the Nimbus works perfectly fine. But a controller with an integrated iPhone clip would probably make a lot more sense for most iPhone gamers – again, the Speedy comes to mind.

But if the Nimbus does fit with the way you play, don’t hesitate to pick one up. At $49, it’s cheaper than almost any other MFi controller’s list price. And for the first time in the history of the MFi controller program, this controller feels like it’s worth every penny of its asking price.