I like to divide the world of MFi controllers into three generations. The first generation was full of deeply flawed controllers, with limited markets, sold at insane prices. The second generation, beginning with the C.T.R.L.i, represented a huge improvement over the first generation in both pricing and quality, but is still lacking the quality and value of first-party console controllers. The third generation, beginning with the Horipad or Gamevice, is exemplified by high-quality products that aim to be taken seriously alongside the best of the first-party controllers, and mostly succeed in this goal. 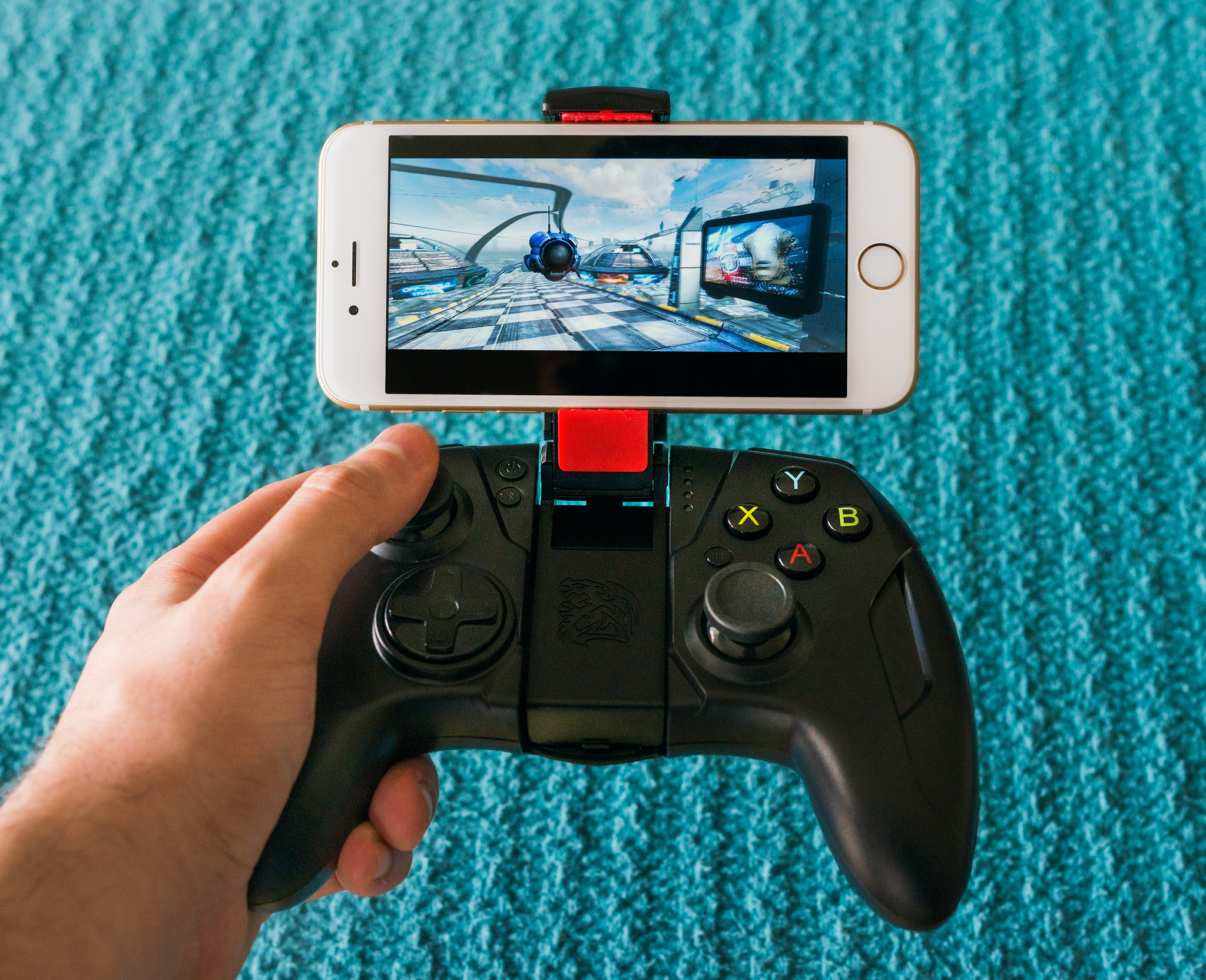 The Contour does, however, have one advantage over every other controller – it’s grip. And this advantage is so significant, and so important to a lot of gamers, that it might be enough to warrant overlooking the Contour’s other issues.

Let’s start this review with the thing that matters the most. The most important part of the Contour – by far – is it’s iPhone grip. This is the one clear advantage the Contour has over every other MFi controller.

Among the few other controllers that do have clips, the Contour bright red fold-up grip is easily the best. The Mad Catz clips require you to screw and unscrew them between uses, making them less portable. The Moga Rebel has a similar clip, but the controller is garbage in every other way.

I’m not overstating it when I say that the clip is the most important part of the Contour. As I’ll cover throughout this review, there are many flaws and design issues with this controller. Just about every aspect of the Contour is inferior in some way to various other MFi controllers out there. Every aspect except the grip, that is. 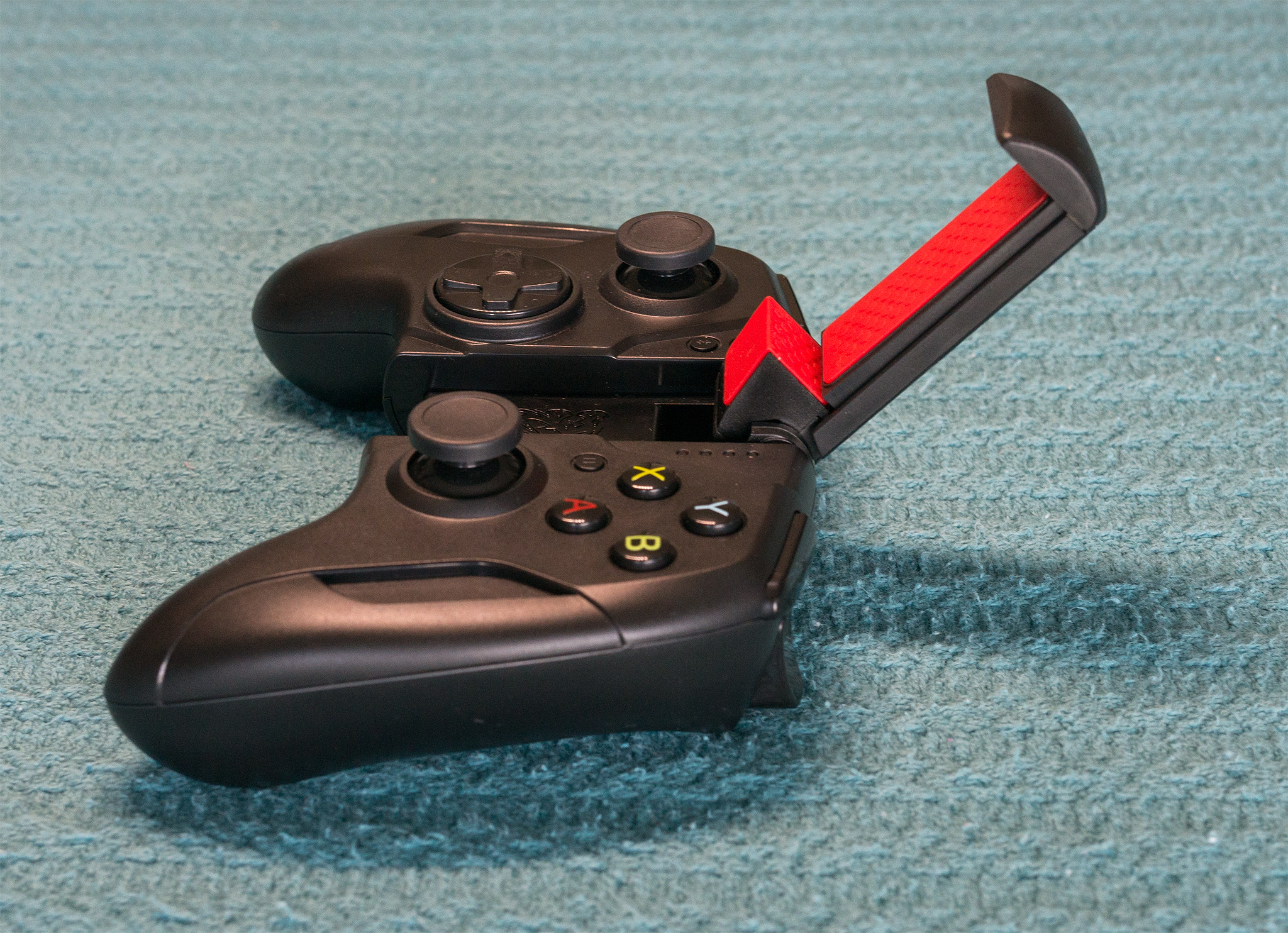 The only issue with the Contour’s grip is that it can be difficult to actually pry it open from the controller. You’ll need to stick a fingernail in there and really pry it loose. Its tricky at first, but you’ll get the hang of it after practicing it a few times.

How much you should overlook this controllers various flaws should come to how important the iPhone grip is to you. The grip is the Contour’s biggest saving grace.

The Contour… casts a distinctive figure. Most modern controllers strive to be at least somewhat ergonomically designed. Even Sony finally abandoned the angular shape of the Dualshock 3 for a more comfortable Dualshock 4.

The Contour, on the other hand, is not particularly comfortable. Its face is embellished with superfluous indentations on the front of the handles, which dig into your hands a bit while you play. To the best of my knowledge, there is absolutely no reason for these indentations – its a purely aesthetic choice. Even as an aesthetic choice, it doesn’t appeal to me, but your tastes may vary. 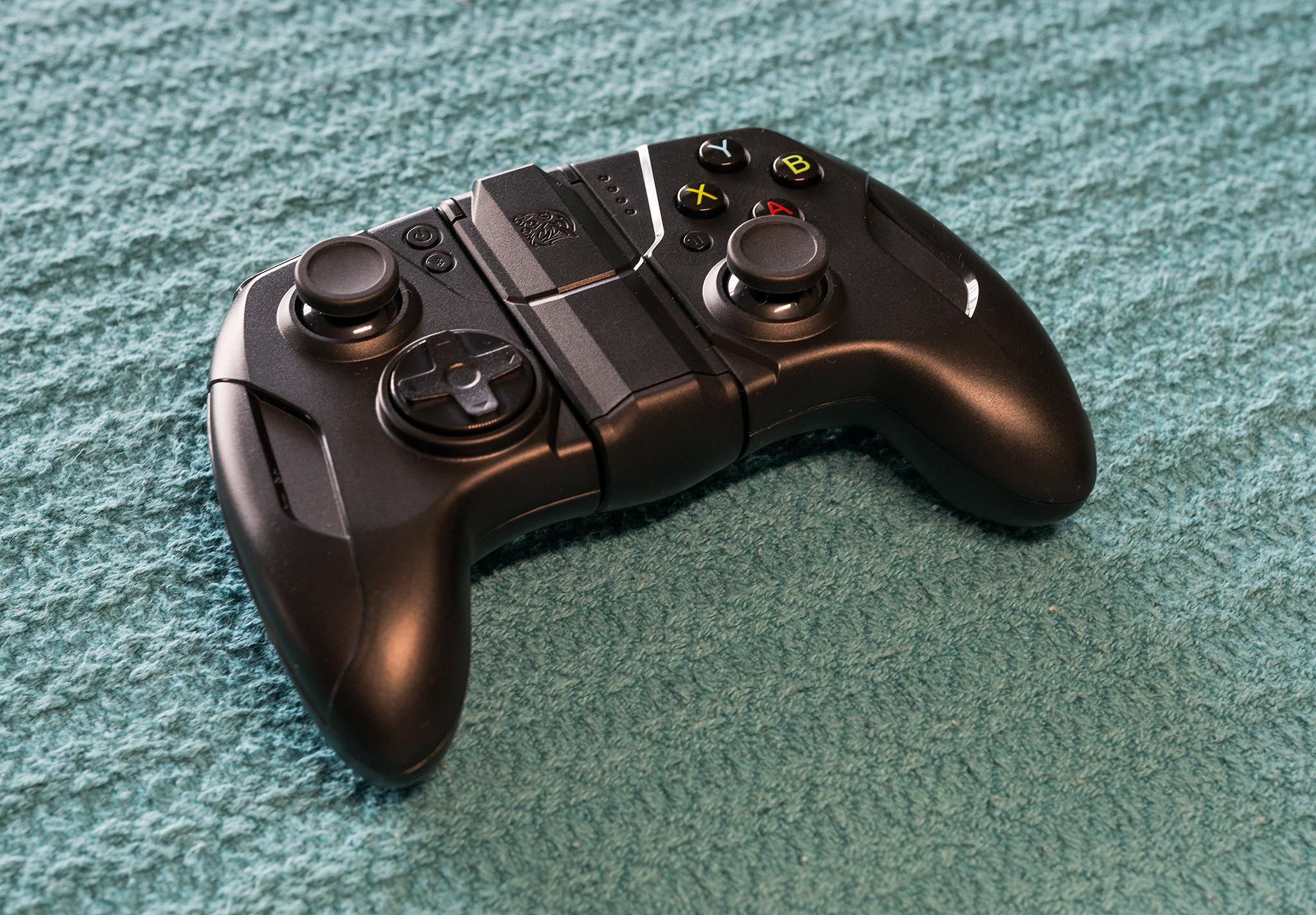 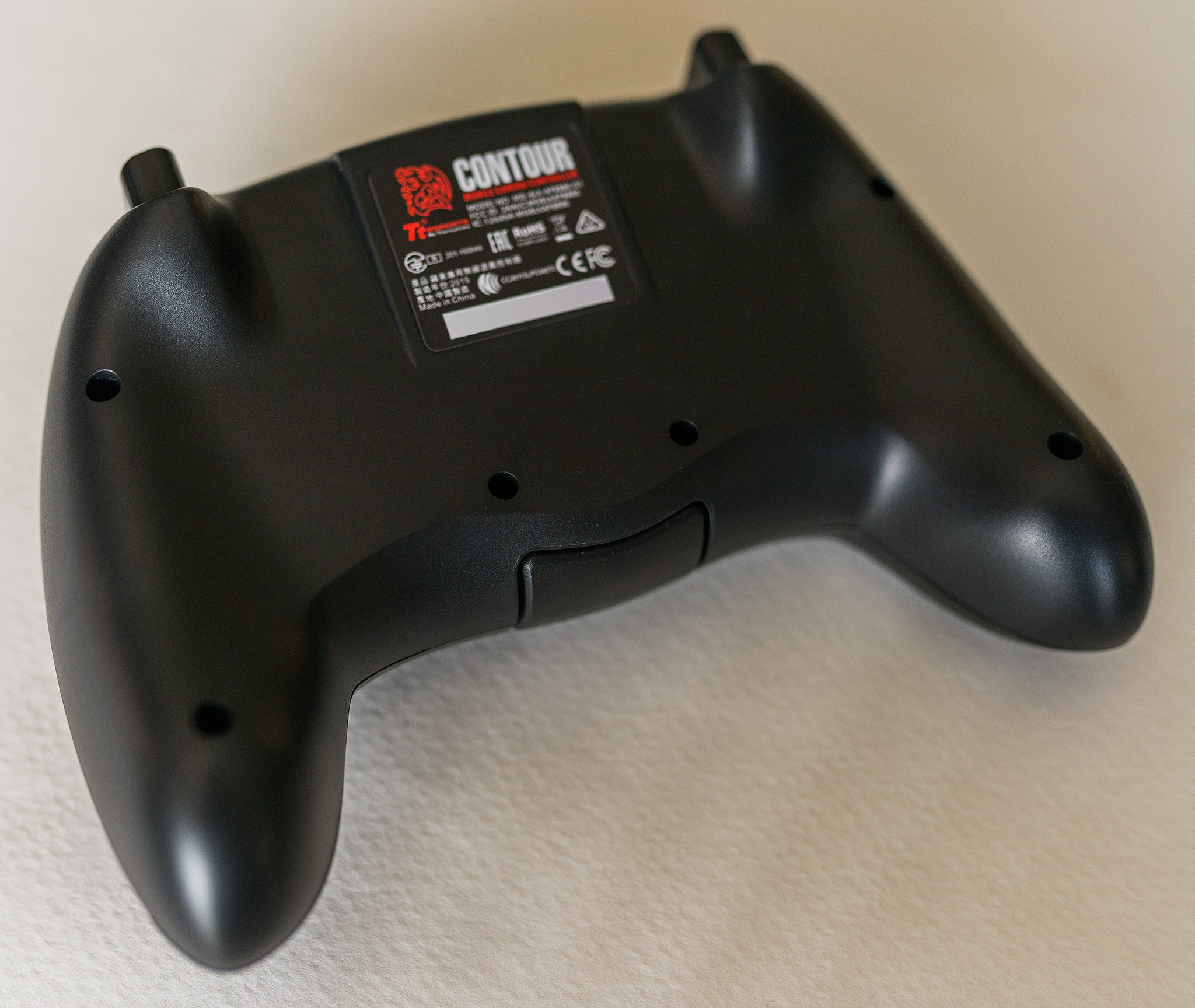 The weight is another area where TteSPORTS nailed it with the Contour. Similar to the C.T.R.L.i and Stratus XL, there are extra weights inside the body of the Contour, making the entire thing feel pleasantly hefty and appropriately “premium”. Comparing the feel of a weighted controller to a light one like the Moga Rebel is a night-and-day difference – when it comes to controllers, heavy is better.

The d-pad has consistently proven to be the most difficult thing for MFi controller makers to get right. There are only 2 MFi controllers with good d-pads: the Gamevice and the Horipad. Every other MFi controller d-pad is terrible.

The Contour’s d-pad is adequate. It isn’t a train wreck like that of the C.T.R.L.i and Stratus controllers, but it is many levels below the d-pads of the Horipad and Gamevice. Although the d-pad itself is circular, there is a plus-shaped design raised out from the circular base. This elevation has a matte texture and indentations for each of the directions. 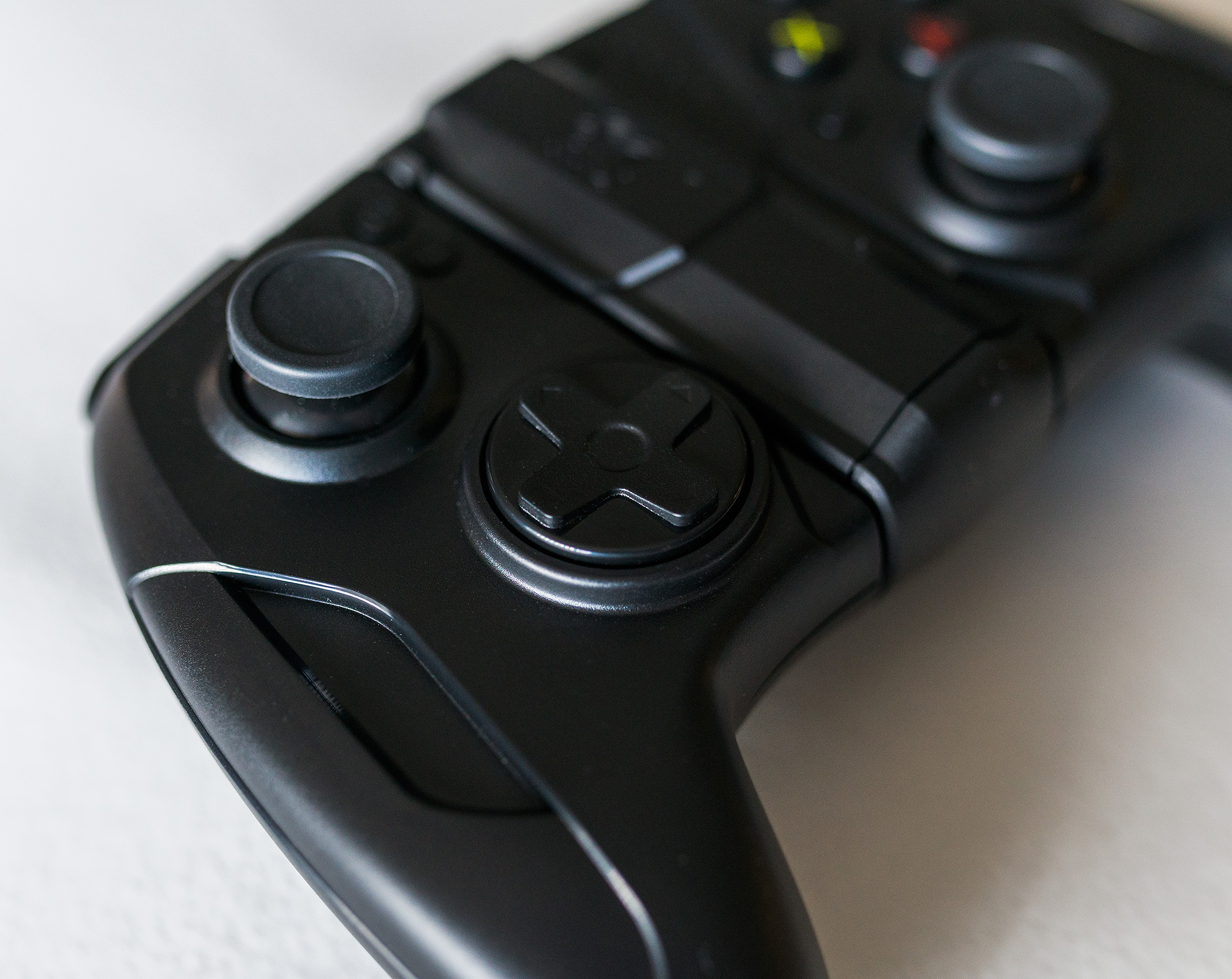 The Contour’s analog sticks were my biggest worry since I first saw them last year. The single ridged edge and lack of texturing seemed like it would make these sticks too slippery to use comfortably. We’ve seen this design used before, and the results weren’t so good.

In practice, the analog sticks hold up better than I feared. The surface of the sticks is rubberized and slightly concave, the ridge is elevated higher than usual for this design, and the sticks themselves are among the largest on any MFi controller. The result: my thumbs rarely slipped. The full-size C.T.R.L.i, Gamevice, and Horipad’s sticks are a bit better for long sessions, but the Contour’s sticks hold their own. 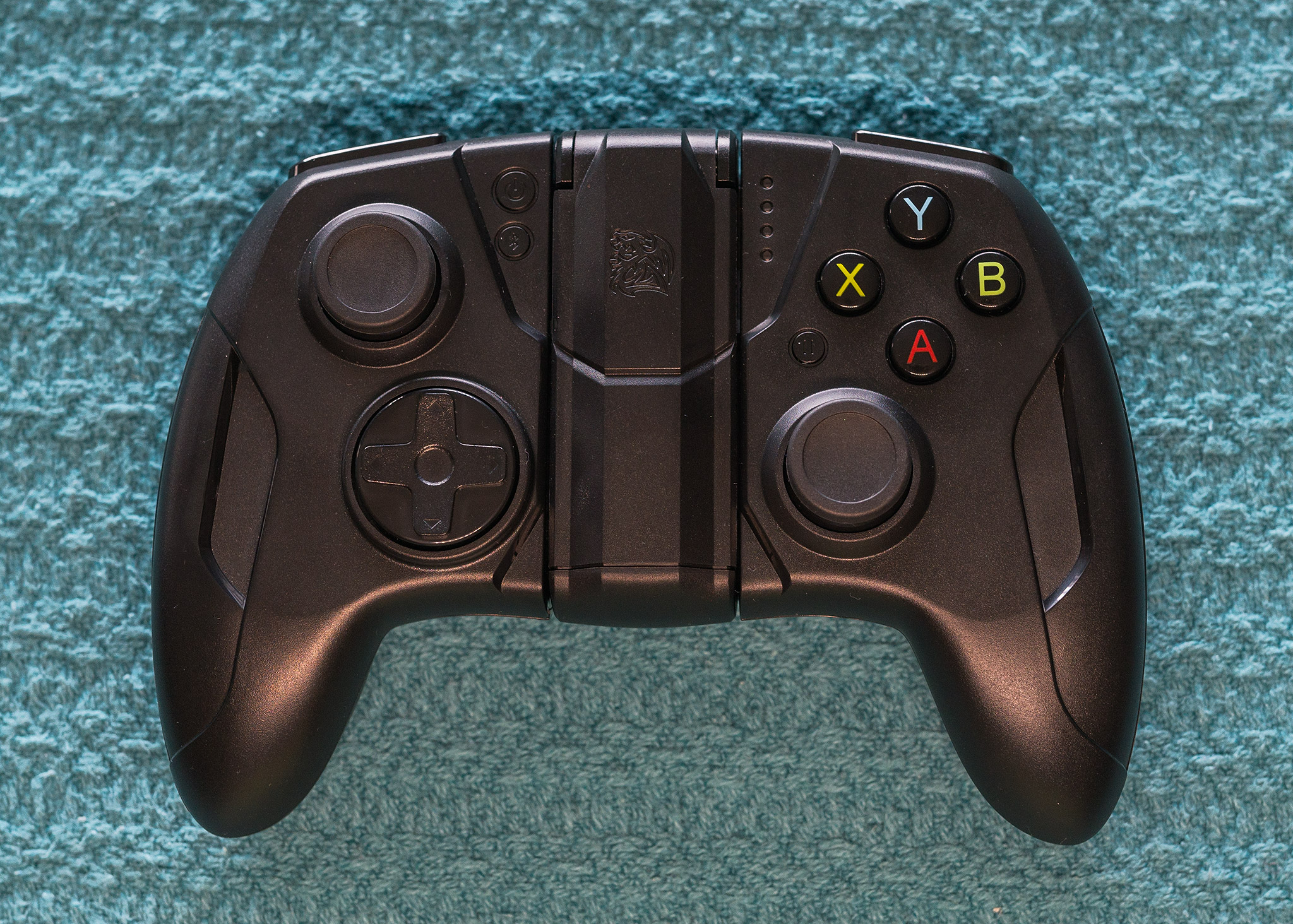 The face buttons on the Contour are pleasantly sized, glossy textured, well-spaced from one another, and adequately springy. If I had to nitpick, I’d say they’re a bit too shallow to the surface of the controller, leading to my thumb to occasionally touch the face of the controller when bottoming out a button. Still, job well done here – I’ve used far worse face buttons than these.

The Shoulder Buttons and Triggers

The triggers… sigh… here we go again. If you’ve read my SteelSeries Stratus XL review, you know where I’m going with this. 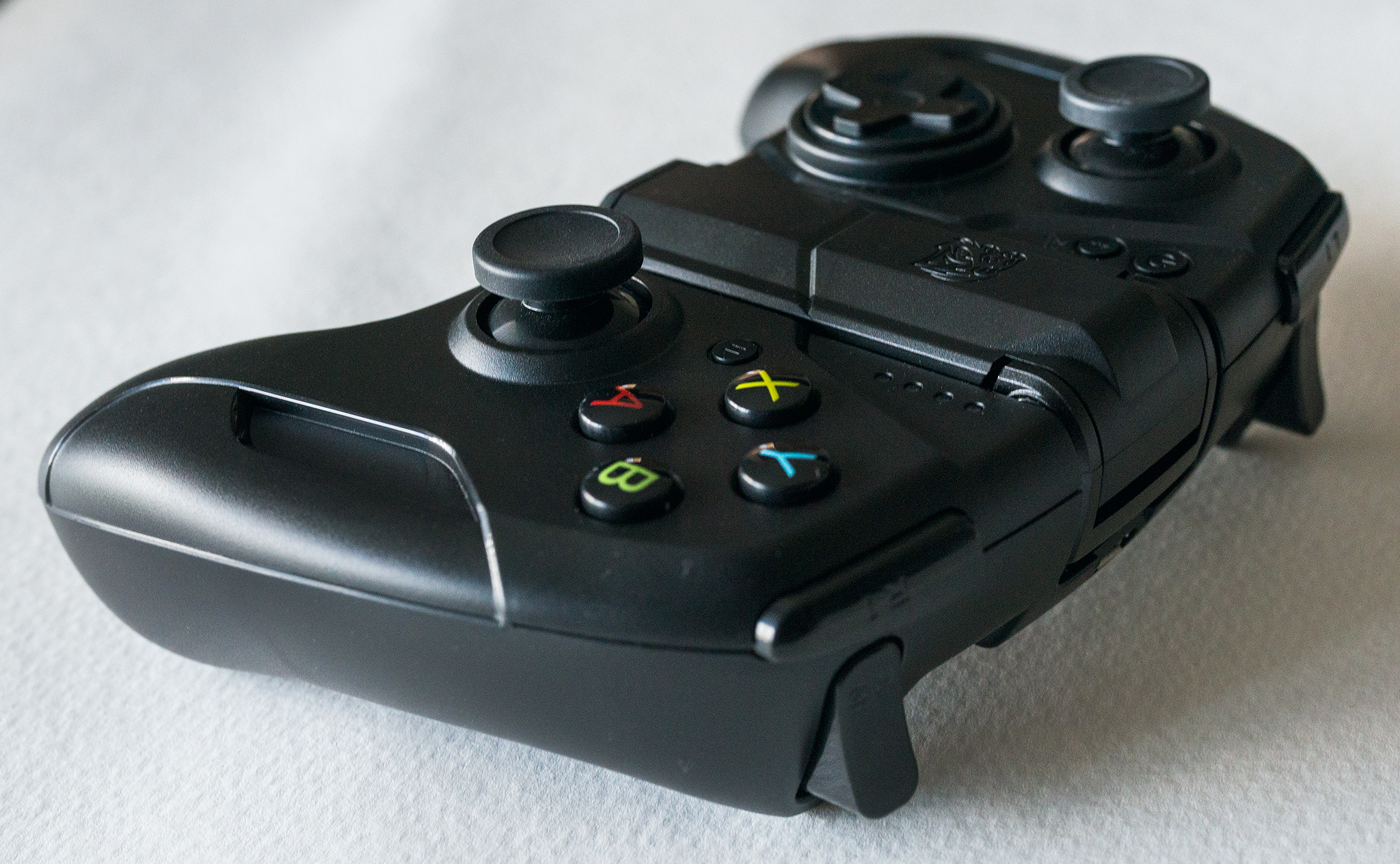 As for the shoulder buttons, they sometimes exhibit the opposite problem. If you try to hit them from an off angle, they sometimes won’t register the input. They require dead-on presses to reliably activate. I generally have a habit of hitting shoulder bumpers from the side, using the middle sections of my pointer fingers. Somewhat frustratingly, the Contour doesn’t lend itself well to that play style.

Like every other MFi controller of this style, the Contour connects to your iOS device using Bluetooth. This provides for the highest degree of compatibility – the Contour works with all MFi-compatible iPhones and iPads, and presumably works with the upcoming Apple TV as well.

The Bluetooth connection used by the Contour is surprisingly high quality. It has a low input lag, meaning button presses register almost immediately. The polling rate seems higher than most other bluetooth controllers, meaning fine details are registered smoothly – there is no jerkiness to analog inputs or pressure sensitivity.

I occasionally experienced disconnects when using the Contour with certain games, namely Grand Theft Auto. However, these were very rare, and difficult to reproduce. I have no idea if they were caused by the controller, game, or iOS firmware. Something I’ll keep my eye on, but don’t let it scare you away. 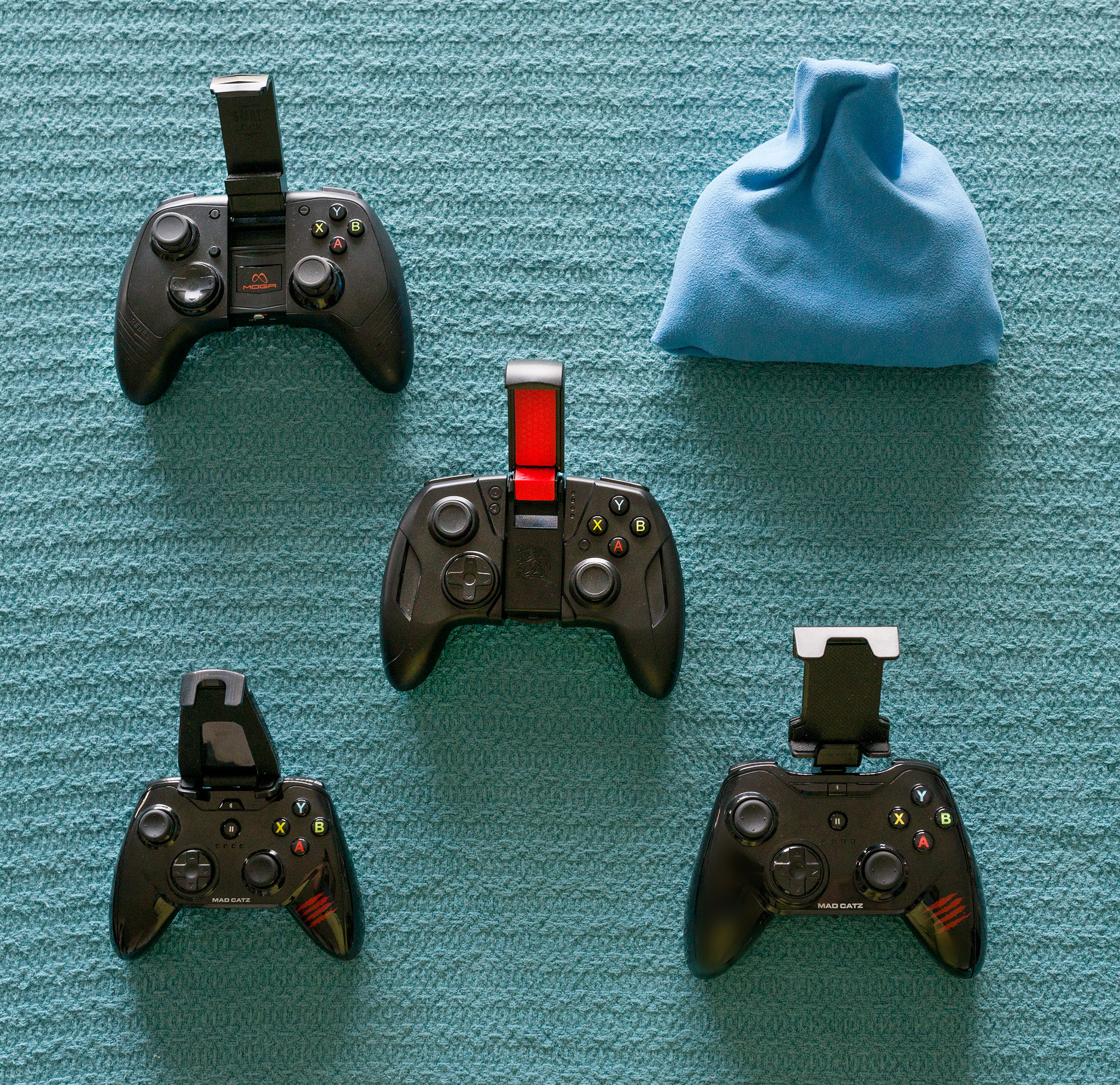 All the MFi controller grip options!

The Contour features an integrated rechargeable battery. TteSPORTS says it lasts for 10 hours, but in my experience, it seems to last a lot longer than that – I’ve only charged it once in the several weeks I’ve owned it. When you do need it, charging is handled with a standard Micro USB cable, included in the box.

This is exactly what I want from an MFi controller. No non-standard USB cable, no need to carry around extra batteries. The only thing that would make this better would be if it charged with a Lightning cable, but presumably this controller was designed before Apple allowed controllers to do this.

Unlike some other MFi controllers, TteSPORTS does not have a companion app for the Contour.

The good news: if you want to see a list of available games for the Contour, TteSPORTS has a complete list of all compatible games, live-updated, directly on their site. How complete is it? Well, it’s powered by my very own AfterPad MFi Game Database, so very complete!

The MFi controller spec requires each controller to be capable of receiving firmware updates, so presumably TteSPORTS has the ability to release a PC program for this purpose. But alas, there doesn’t appear to be a way to do this directly on iOS. 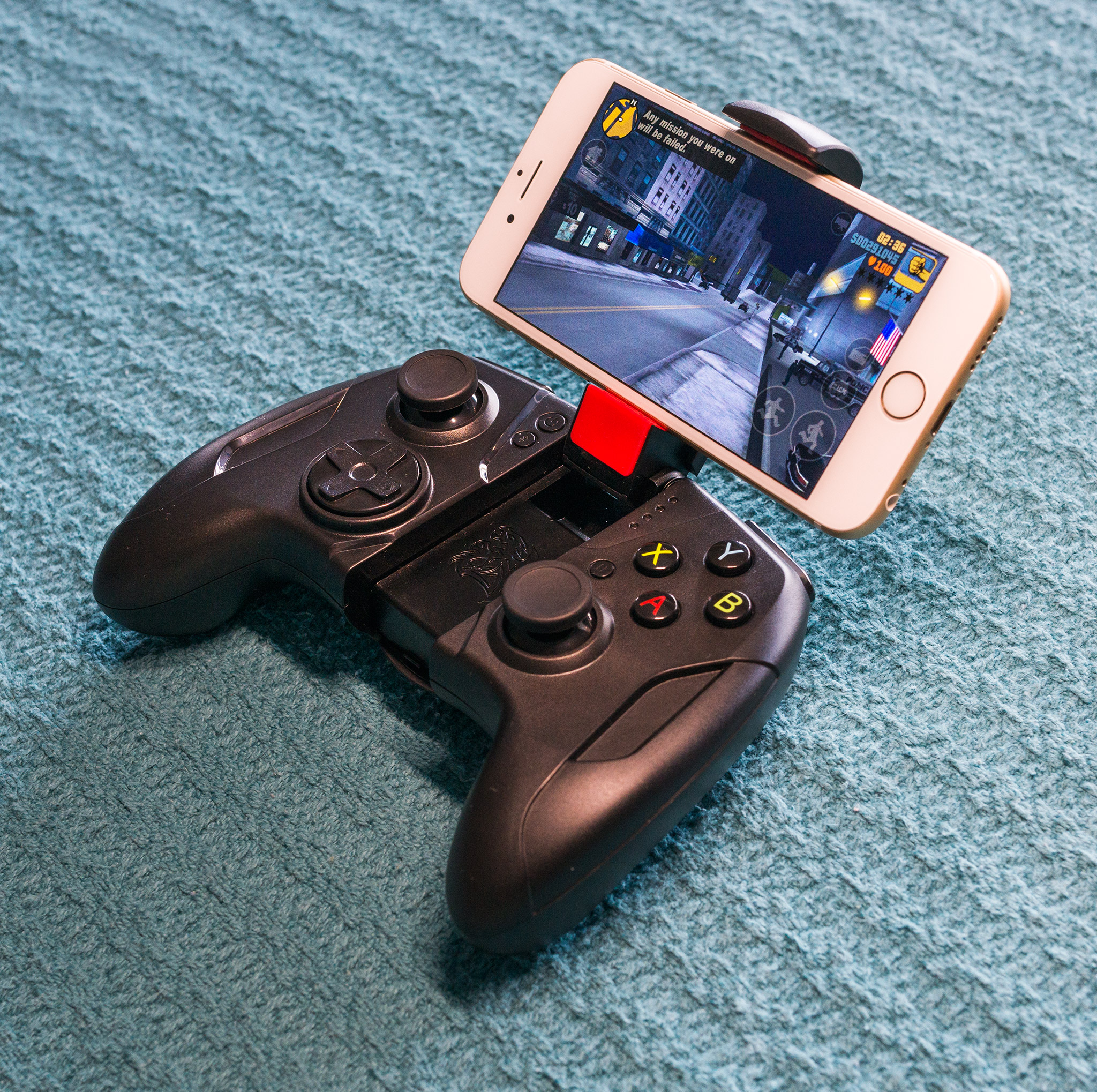 The Contour is not the best MFi controller. Almost every aspect of this controller – overall feel, d-pad, analog sticks, buttons, triggers – everything has been done better by other controllers.

Every aspect but one: the iPhone grip. The Contour’s iPhone grip is by far the best of any MFi controller. It’s solidly built, it doesn’t cover up any buttons, it’s big enough to support an iPhone 6S Plus in a case, and it folds up right into the controller when not in use.

This is not a small advantage. This is not a minor thing. If you’re an iPhone gamer who wants to grip your phone into a controller, the lack of such a grip is a deal killer. It simply doesn’t matter how good other controllers might be – they aren’t even relevant to you.

Among controllers with grips, the Contour has only one peer: the Mad Catz C.T.R.L.i – everything else can be ignored. Against the C.T.R.L.i, it’s a tough call. 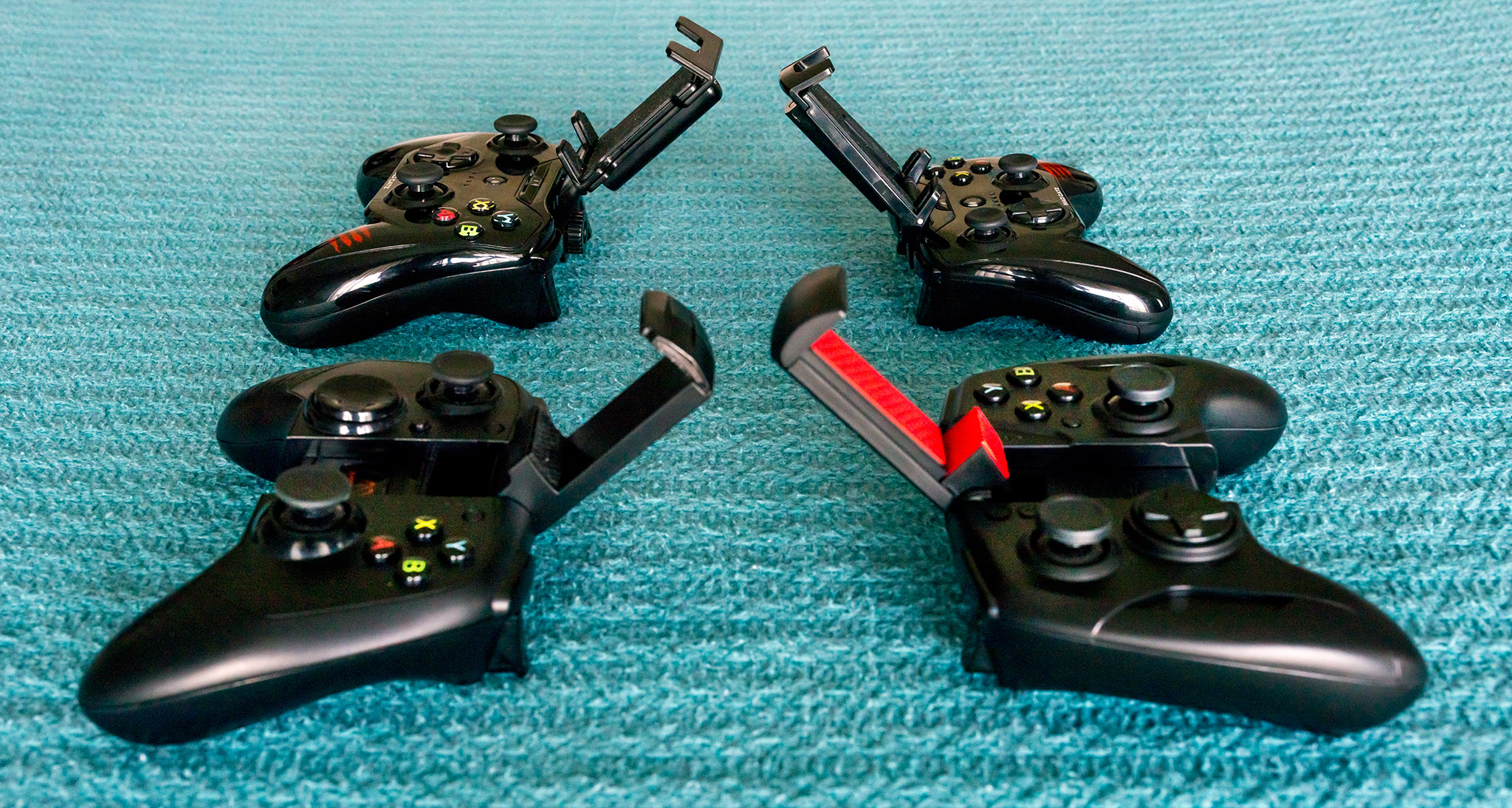 The Contour and the competition

In its favor, the C.T.R.L.i has a better overall shape, multiple colors, better analog sticks and shoulder buttons, much better triggers, and a $20-$30 lower price tag. The Contour counters with a superior fold-up iPhone grip, an integrated battery instead of requiring AAAs, and a significantly better d-pad.

Whether or not you should buy the Contour over the other options comes down to personal preference after weighing its advantages and disadvantages. The Contour isn’t for everyone, but that’s okay. The Contour is exactly the controller a certain subset of iOS gamers has been waiting for, and its going to make its audience very happy.